Thatcher and Earle at double as side complete fight back 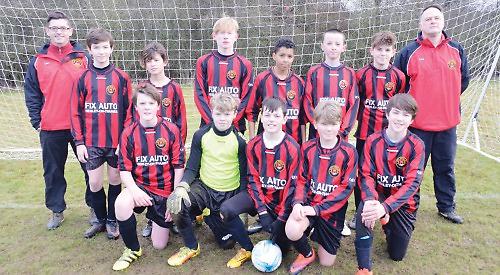 AFC HENLEY U16s fought back from 2-0 down to secure all three East Berks League Division 2 points as they defeated EVERSLEY AND CALIFORNIA U16s 4-2 last Saturday.

Following two close games against Eversley this season this game started in a similar fashion. The visitors pressed in all areas of the pitch and this produced problems for Henley in maintaining possession.

Evident in a fairly even first half was Henley’s inability to find a penetrating pass in and around the penalty area. The closest the home side game was a snap shot which hit a post. Eversley led 2-0 at half time through an unchallenged headed goal resulting from a free kick and a well-taken shot from a long forward pass.

From the start of the second period, Henley established domination of territory and possession. Archie Thatcher scored early with a well-taken low shot and followed it with the equaliser from an incisive pass from Green, turning and firing a shot into the far corner of the net.

Henley displayed good game management throughout the second half in what, arguably, was one of their best performances of the season.

AFC HENLEY HURRICANES U13s, playing their first match since December, went down to a 2-1 defeat at home to WOKINGHAM AND EMMBROOK BLACKS U13s.

The hosts won a penalty in the first five minutes but Charlie Strachan-Jarvis was denied by a good save from the visiting keeper. Henley dominated for periods but were unable to find a goal despite several openings for the strikers. Eventually the away side went ahead after hitting Henley on the break.

The second half was evenly contested and Henley pulled a goal back after half-time with strike from distance from Byron Ruffell.

Wokingham took the lead again after some rare indecisive defending. Goalkeeper and man-of-the-match Joel Trinder kept Henley in the game for a spell, including pulling off a penalty save himself, but neither team was able to find a further goal.

AFC HENLEY HURRICANES U10s fought back to earn a draw at HIGHMOOR U10s.

Striker Luca Thomson was instrumental in the performance as he set up the first goal and worked tirelessly up front to secure a point for the visitors.

The Hurricanes started well as Tom Bonser sent a defence splitting pass through to Thomson. He beat a defender only to see his thumping shot hit the post. However, man-of-the-match Joe Turner, alert as ever, was following up and smashed the ball into the net to give the visitors an early lead.

More was to follow for the Hurricanes at the start of the second quarter as Nicolai Bruun-Andersen showed quick feet to send a through ball to Sam Winters who let the ball run across him before firing home to make it 2-0.

However, in 10 minutes the Hurricanes went from heroes to zeroes as they leaked four goals before half time. It could have been worse for the visitors had it not been for a fine save from keeper Ben Horner as he leapt to tip a 20 yard shot over the bar.

The Hurricanes came out fighting in the second half. Captain Olly Saunders led the way with his calm, organisational approach and clever distribution from the back.

With this solid platform to build from it allowed Finnbar Scott and Tom Bonser the freedom to express themselves and attack. It was from a Bonser corner that the fight back began as he delivered an inch perfect corner that Sam Winters latched on to the end of as he glanced a header beyond the home keeper.

This set the game up for a barnstorming last quarter as the Hurricanes poured forward in search of the equaliser. It was Tom Atkinson who lit the touch paper for a dramatic last 12 minutes as he won a tackle down the right side before slipping a through ball to Tom Yeoman. Yeoman showed all his skills as he beat two defenders before hooking the ball into the net to level the scores at 4-4.

AFC HENLEY HOTSPURS U9s fought back to run out winners at BARTON ROVERS U9s against a side that had yet to be defeated in league and cup this year.

The visitors attacked from the off, putting together some slick training ground moves, hitting the post once and coming close in several goalmouth scrambles. However, they failed to maintain the pressure on the large pitch, and sitting back, let their opponents dominate and take a 2-0 lead into half-time. The third quarter was evenly contested until leading goal scorer Marlon Brough jinked through the Barton Rovers defence and struck the ball cleanly into the bottom corner. Another goalmouth scramble saw Jonty Priestley calmly slot home from a few yards and the scores were level going into the final 12 minutes.

The Hotspurs upped the tempo, the midfield battling for every ball, Gudjohnsen-Mitchell, Ingram, Mennie, Van Blerk, Aitken-Woods and Edwards covering a lot of ground. With just four minutes remaining Harvey Weller was in the right place to scramble the ball.

One final counter attack from Barton Rovers was denied by a fine save by Eddie Dixon-Ainscough.