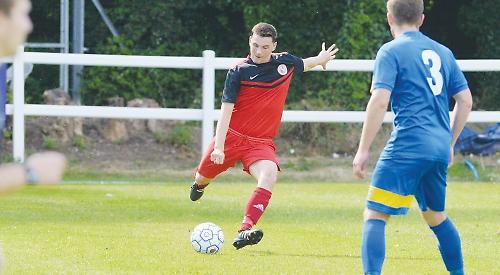 READING Senior Cup holders Henley Town made it through to the next round of this season’s competition after defeating Hurst 2-1 at Mill Lane on Tuesday night.

The Red Kites were drawn away to play Thames Valley Premier League basement side Hurst in the second round of the competition but as their opponents didn’t have floodlights the match was switched to the Triangle to help avoid both leagues having weekend fixture congestion.

On a heavy pitch, which was a great leveller, the neutral would have found it hard to decide which team played its league games at a higher level of football with Henley Town at level five and Hurst at level seven in the pyramid system.

Both Matt Quilter in the Hurst goal and Henley’s Garry Aulsberry were tested in the early stages but it wasn’t until the 41st minute that the deadlock was broken. The lively James Spruyt worked his way down the right flank and his cross was scrambled home by Reece Buckett to put the Red Kites ahead.

After the break the game continued to be end-to-end with both sides having chances but it wasn’t until the 82nd minute that Henley managed to increase their lead when 17-year-old newcomer Spruyt slotted the ball to Matt Quilter to make it 2-0.

Hurst never gave up and made it 2-1 when Shaun Bannon forced the ball past Aulsberry from a crowded six yard box in injury time.

NEW signing James Spruyt had a debut to remember after firing Henley Town on their way to a 3-0 win at Didcot Reserves on Saturday in the Bluefin Sports Hellenic Supplementary Cup.

The 17-year-old attacking midfielder wasn’t named in the original line-up for the cup tie but was brought in after Seve Mayberry injured his groin in the pre-match warm-up.

Spruyt bagged a brace, scoring his first on 30 minutes, before adding a second early in the second half before Callum Carlisle ensured the win just two-minutes later.

The Red Kites started well and were unlucky not to take the lead early on but for a timely challenge by Lewis Wilcox which allowed home keeper Beesley to collect easily in their first attack.

Didcot replied with a Lewis Noble shot from a tight angle, which was well saved by Garry Aulsberry in the Henley goal. The hosts then had a corner which was well cleared before debutant Nyarko had a shot low from the edge of the box go wide.

Henley fought back when they had a low shot saved by Beesley, who tipped the ball around the post.

Nyarko then left the field injured for the home side and Wilcox then headed just past the post from a corner. But it was an error from Beesley who spooned a low shot in to the air and into the path of Spruyt who grabbed his first goal for the club to give the Red Kites the lead at the break.

Shortly after the re-start Henley doubled their lead when Spruyt again took advantage of a poor Beesley clearance to grab his second.

Carlisle put the result beyond doubt by finishing a cross from the left wing with still 40 minutes of the half remaining.

The Red Kites could have scored a fourth from the spot after Parish committed a foul in the box but Beesley did well to save low down. This seemed to spur on the home side and Hammond had a couple of testing shots saved by Aulsberry.

The Henley goalkeeper then pulled off two fine saves from MacDonald and Hammond in the last 10 minutes to ensure a clean sheet for the visitors.