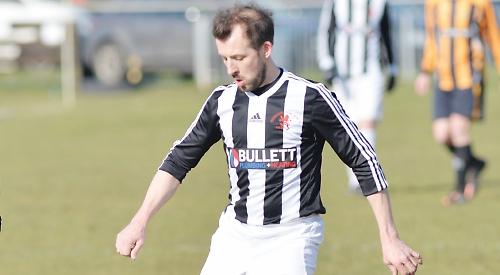 ANDY BULLETT netted his first ever hat-trick to help visiting side Woodcote/Stoke Row secure their place in the semi-final of this season’s Berkshire Trophy Centre Senior Cup last Saturday.

In an untidy game the final outcome could not have been predicted after the first 30 minutes when Woodcote trailed 3-0 to their lower division opponents Winnersh Rangers and looked to be on their way out.

Three strikes from the left hand side of the box, with the Woodcote defence failing to close down the striker on each occasion, gave Winnersh a clear advantage, while Woodcote seemed unable to launch any meaningful attacks.

With the half nearing its close Woodcote narrowed the gap not once, but twice. Winnersh were down to 10 men with a player off injured and Frank Dillon was twice able to exploit the extra space. On 42 minutes his throw was headed on by James Worsfold and Bullett arrived at the far post to supply the finishing touch.

In time added-on Bullett struck again and once again Frank Dillon played a part. He robbed a defender near the goal-line and crossed to the far post for Bullett to head home.

The first half hour of the second half saw both teams lack sufficient quality to create any worthwhile chances, but on 75 minutes a Winnersh player was shown a red card for a high two-footed tackle on Tommy Chapman.

Winnersh continued to hold-on to their 3-2 lead until substitute Dave Givens, scored with a free kick from 20 yards with his first touch of the ball. Before the game could be restarted a second Winnersh player got his marching orders for a remark to the referee.

In extra time Woodcote were able to exploit the additional space and they took the lead when Frank Dillon blasted home from close range.

Winnersh soon made it 4-4 after more sloppy defending by Woodcote. After a series of straightforward chances had been spurned by Woodcote forwards, substitute, Jake Dillon, made it 5-4 in the second period of extra time, with a shot into the far corner from a narrow angle.

Finally, when Woodcote were awarded a penalty for a foul by the Winnersh keeper, Bullett stepped up to complete his hat-trick and put the result beyond doubt.