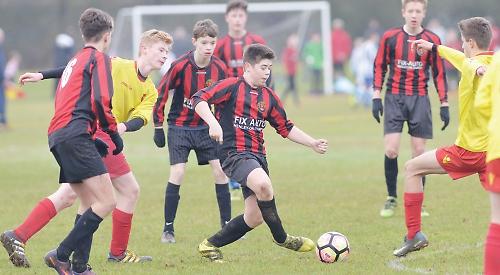 After a bright start by the away team, the Hurricanes asserted themselves on the game, growing in confidence as the half wore on.

Gabriel Langford and Ben Stodolnic controlled the centre of the park, feeding the willing runners in front of them. After a number of half chances, Pawel Kaczorowski turned on the edge of the box and rifled a shot towards the top corner but the Pinewood keeper tipped the ball behind at full stretch.

The Henley team continued to apply pressure with Henry McDonagh twice going close and a series of corners brought about further chances, but they couldn't take them.

Against the run of play Pinewood went down the other end and scored with one of their few attacks.

The second half continued in the same vein, but for all the Hurricanes’ endeavour, they struggled to find the end product and Pinewood made them pay when their tricky winger was brought down in the box and the resulting penalty was dispatched to give the visitors a 2-0 lead.

The Hurricanes continued to press but were undone again, conceding a second penalty in identical fashion. This time keeper and man-of-the-match Sam Butler guessed correctly, diving to his left to push the ball behind.

With renewed enthusiasm, the Hurricanes were now attacking with verve. Jake Jones was regularly getting the better of the Pinewood fullback and one of many forays ended up with him putting the ball across the six yard box for Kaczorowksi to bury in the back of the net and to reduce the arrears.

Soon after Pinewood regained their two goal cushion which deflated the home team just when they were in the ascendancy.

The Hurricanes, who were already low on confidence in a highly competitive Division 1, continued to play some good football and create further chances but it was Pinewood who finished the scoring, adding a fourth against the run of play.