Chaplin at double as side secure final spot 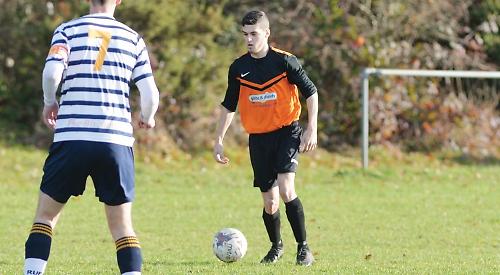 HENLEY TOWN’S Sunday side secured their place in the E Cambridge Cup final in an incident-packed semi-final at Sol Joel last weekend against Coley Park.

Coley Park raced into a 1-0 lead as Henley started the match slowly. The match could have been beyond Town early on as Park were awarded two penalties but both were missed.

Henley were indebted to goalkeeper Arron Stevens for pulling off several good saves to keep his side in the game. Soon after Town started to dominate and equalised when good work from Sam Earl was finished off when he crossed for Arran Finch to slot home.

Coley again took the lead through a long ball which was latched on to and slotted home by their pacey winger.

Good play through the midfield released Tom Chaplin on the right who again beat his fullback and his cross-cum-shot nestled into the far corner to equalise for Town.

The tie appeared to be won in the 90th minute when Coley took the lead for the third time in the match.

However, from the kick-off the ball was played back into midfield and passed out to the right for Chaplin to run on to where he created space for a cross which he whipped in to find captain Josh Collins towering above the Coley defence at the back post to head home.

Henley dominated extra time keeping the ball well with some good flowing football. Town took the lead for the first time when a Chaplin corner was volleyed home by Hugh Barklem into the far corner of the net.

Henley won a free kick on the edge of the box which Chaplin scored to put his side 5-3 up.

In the second half of extra time Henley continued to control the game with Earl and George Chaplin dictating the pace of the game in midfield.

The tie was put to bed by Earl who, after receiving the ball on the edge of the box, calmly fired home.

Henley Town will now meet their Division 3 East promotion rivals in the final in May at Scours Lane.