Joyce and Gupta at the double 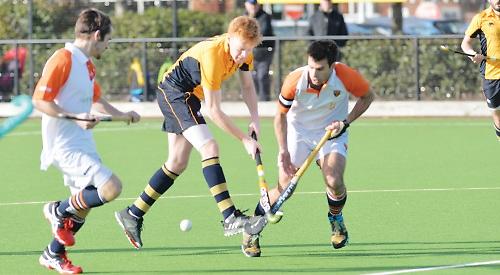 At home to Old Cranleighans on Saturday the amber and blues went down to a 3-1 defeat.

After early pressure from the hosts, Old Cranleighans scored a breakaway goal after 10 minutes, after a long ball played down the left wing found an unmarked man in the Henley D.

Henley equalised after 20 minutes, as Luke Gupta pounced on a loose ball in the Old Cranleighans’ D, after some fine work by Alex Land on the right wing.

Old Cranleighans scored another breakaway goal 15 minutes into the second half to retake the lead despite Henley being the more dominant of the two sides.

Constant Henley pressure resulted in yet another counter attack goal by the visitors as they took control of the match at 3-1.

Desperate to keep Henley at bay, Cranleighans saw three men sin-binned for reckless tackles in the final 10 minutes, and despite dominating the whole of the second half, Henley couldn’t find the net.

THE following day Henley 1sts got back to winning ways as they eased to a 6-0 win at bottom-of-the-table Guildford.

Henley started strongly as both sides traded blows at each end of the pitch. Some strong defensive plays from Tom Walter and Ali Slay kept Guildford pressing outside of the danger D.

After good link up play down the right hand side, Jonny Taylor was brought down in the penalty area. Rhys Joyce stepped up to score the resulting penalty to put the visitors ahead.

Soon after Henley doubled their lead when Steve Harding reverse pushed the ball into the bottom corner.

Skipper Ed Foster and Alex Land linked up well down the right wing and as the ball was crossed Luke Gupta deflected it home to make it 3-0.

Henley increased their lead early in the second half when they executed a textbook training ground routine as Foster dummied the flick and rolled it back to Gupta who drilled the ball home.

Henley were awarded another penalty when Green rounded the keeper only to be upended. Joyce netted the resulting spot flick to make it 5-0.

The visitors wrapped up the scoring when Newbold found Land who pulled it back to find Green to fire home.