Raiders take wind out of Hurricanes 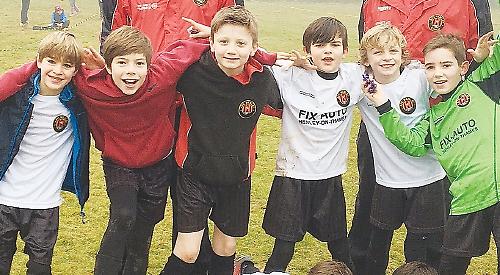 AFC HENLEY HURRICANES U10s lost their first East Berkshire League Division A game of the season as they were edged out of a tight affair at Jubilee Park against HAWLEY RAIDERS U10s last Saturday.

Against the run of play that the Hurricanes took the lead as a well-flighted Tom Atkinson corner was met with a powering header from Nicolai Bruun-Andersen to make it 1 0.

Ben Horner, in the home goal, made some fine saves to keep the hosts’ lead intact at the end of the first quarter.

The Hurricanes stretched their lead in the second quarter as Luca Thomson went on a mazy run and struck a shot beyond the keeper and in against the far post.

Tom Bonser was working hard down the right side of midfield creating chances and tracking back to blunt the Raiders attacks and captain Joe Turner was marshalling the home defence with intelligence and strength.

A complacent Hurricanes let their guard down in the third quarter as the visitors scored three goals in the space of 12 minutes to take the lead. In the final quarter man-of-the-match Olly Saunders hit a sublime shot from 15 yards out only to see it rebound from the inside of the post and spin away to safety.

The Hurricanes were done no favours after conceding a disputed corner from which the Raiders scored to go 4-2 up.

Tom Yeoman led the fightback and he drove the hosts forward from the centre of midfield creating chances and arresting the Raiders attacks.

The Hurricanes battled on and Tom Atkinson played in Sam Winters and he bulldozed his way through to make it 4-3. The hosts strived for the equaliser but ran out of time.