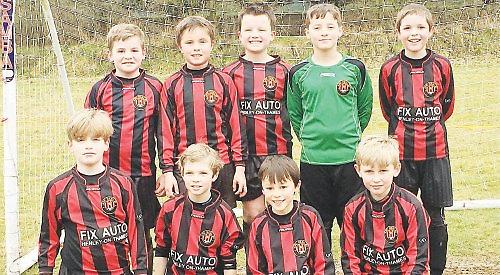 The hosts took the lead in a strongly contested first half when some sustained pressure by Henley Hurricanes, a neat set back just inside the box, was driven low and hard into the far corner by Earle whose clever movement created the space and opportunity to score.

Henley doubled their lead when Earle got on the end of a close range shot from another short pass from Jack Lambourne, who had earlier hit the post following a corner.

Sandhurst started the second half with purpose and had begun to dominate midfield. Goalkeeper Henry Harmer made a couple of good saves and a goal-line clearance maintained the advantage.

The home side used the ball well, improved ball-retention, and began to penetrate the Sandhurst
Town defence. Harry Green and Alex Aldrich in
midfield were instrumental in the Hurricanes dominating the last 25 minutes, creating more chances with Lynskey just shooting over from a pass inside the penalty area.

Tommy Atkinson, playing at centre back, put in a man-of-the-match performance as AFC HENLEY HURRICANES U10s overcame a strong ASCOT U10s side at the Racecourse ground.

The visitors were 1-0 up with the first attack of the game after just 18 seconds. Nicolai Bruun-Andersen sprinted down the left and slipped a through ball to Finnbar Scott who cut inside and hammered a shot past the Ascot keeper.

On a tight pitch the game was an end to end affair with chances for both sides but the first quarter ended with the Hurricanes a goal up.

The second quarter started brightly for the Hurricanes with Joe Turner down the right wing creating chances for the visitors with both Scott and Sam Winters going close for the visitors.

Olly Saunders, in goal for the Hurricanes, was also called into action and he had to make one flying finger-tip save to preserve his side’s advantage at the half-time break.

The third quarter saw the visitors stretch their advantage as Turner set Bruun-Andersen free and having beaten a couple of Ascot players he played in Winters who made no mistake from the edge of the box. Scott had now switched to the goalkeeping position and pulled off some fine blocks as the Hurricanes went into the last quarter 2-0 ahead. The start of the fourth quarter saw Ascot come straight back into it with a strike from 20 yards that gave Scott no chance. With their tails up Ascot went in search for the equaliser and it took some staunch defending from Turner and captain Atkinson to keep the hosts at bay.

The Hurricanes responded well and it took a tough tackle from Bruun-Andersen to set himself up to go on a run. This allowed him to put Luca Thomson in on goal and the striker made no mistake from close in to restore the visitors’ two goal advantage.

With only a few minutes left a searching long ball from Atkinson found Winters in the penalty box and he scored his second goal and the Hurricanes’ fourth to complete the scoring.

The hosts started strongly, with good defending from Oscar Thomas and Freddy Piasecki at the back.

The first and second quarters showed the Hotspurs’ hunger for a goal, dominating the opposition half, firing shot after shot with most going close to the target. Good teamwork and defending from Jake Williams, Tom Francis and Charlie Hunt kept the visitors at bay, with the Panthers only giving goalkeeper Ben Palmer a couple of tricky shots to save. Elsewhere Dexter Harris worked hard for the hosts all over the pitch. Henley took the lead in the third quarter when man-of-the-match Thomas fired home following a good through ball from Stanley Massie. The hosts doubled their lead through Thomas once again having been set up by Massie. Henley pushed to increase their lead with both Charlie Hunt and Daniel Tsoi having shots saved by the Pinewood keeper.