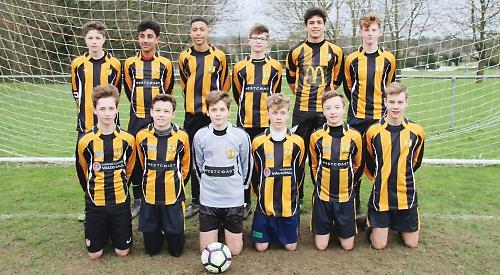 ROTHERFIELD UNITED U14s progressed to the semi-final of the Oxfordshire Cup after defeating NORTH LEIGH U14s 2-1 at Bishopswood on Sunday.

Going into the match the visitors were second in Division 1 of the Oxford Mail League and until Sunday Rotherfield had always failed to get a result against them.

Division 2 side Rotherfield, who are seven points ahead of the second-placed side with a game in hand, went into the match full of confidence.

North Leigh took the lead when they took advantage of a rapidly taken free kick to deflect off the head of a Rotherfield defender, the ball landing close to the feet of a visiting striker who lobbed goalkeeper Luke Taylor after 12 minutes.

United went close to equalising when front man Manuel Da Silva went one-on-one with the North Leigh keeper who pulled off a good save.

Rotherfield were in a slightly different formation from normal, with only one player up front, due to key players being unavailable due to injuries from games earlier that weekend. This meant much of the play was focussed on the centre of the pitch, with good shifts put in from Bashir Humphreys, Rowan Prince and Max Summers making sure that Rotherfield just kept the edge.

At half-time, Rotherfield changed formation, back to their more accustomed 4-4-2 with Felix Grant going up front with Da Silva, with Peter Evans and captain Charlie Wagstaff on the wings. Rotherfield’s defence of Daniel Watts, Zac Preston, D Mahabir and Charlie Masters were effective at repelling the North Leigh advances, with Rotherfield just edging the balance of play but not enough to secure that elusive goal.

With 10 minutes left of the game, Rotherfield took a gamble and went to three in the back, pushing Mahabir forward, and Wagstaff into centreback. Four minutes later the gamble paid off – Mahabir deftly backheeling the ball to Da Silva who carved through the three defenders North Leigh had on him to sidestep the keeper and put in the equaliser. With just 40 seconds left Mahabir yet again fed man-of-the-match Da Silva who managed to find the net in a very congested box. Rotherfield will now face Oxford City in the final.

The game started slowly although Rotherfield were unlucky not to score in the first minute, with a huge goal kick taken by D Mahabir sailing over the heads of the Henley defence with Manuel Da Silva running on to it, kicking it directly at the keeper.

Some 10 minutes in Rotherfield found their stride with a strike from Rowan Prince just outside the box finding the top left corner of the goal.

Rotherfield remained the dominant side, but it wasn’t until the second half that they managed to increase their goal count with a run by Sam Agg down the left wing to cross it into the corner of the Henley goal.

Agg went on to double his tally with another well taken goal, the fourth Rotherfield goal being awarded to Da Silva.