Substitute snatches points with first touch of the ball 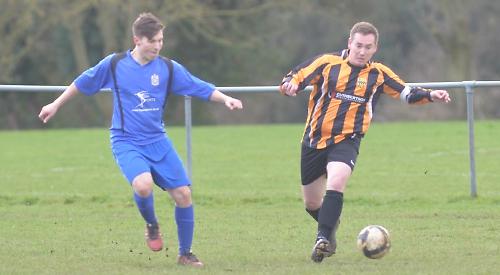 FOLLOWING the excitement of the midweek win over Highmoor in the Reading Senior Challenge Cup, WOODCOTE/STOKE ROW drew their attention back to the league against WRAYSBURY.

The best that can be said about the match was that the hosts deserved to win by a small margin but, in truth, it was a drab affair with little to enthuse a decent-sized crowd.

The first 15 minutes saw Woodcote take charge with some lovely flowing passing movements but fail to really test Wraysbury, who started the game with 10 men.

Chances were created and spurned by the hosts but it didn’t seem to matter because it seemed only one goal was needed to open the floodgates.

But as the visitors weathered the storm they began to venture into the Woodcote half and found an unusually hesitant defence.

Thus the best chance so far fell to Wraysbury after 15 minutes and only a sharp save by Kane Roberts prevented a goal.

Two minutes later it was the same story. This time Roberts tipped over, although the referee awarded a goal-kick.

Woodcote continued to harass the visitor’s defence but they were undermined by poor decision-making and too many inaccurate passes. The best chance of the half fell to Michael Simpson who found himself in the clear but allowed the ball to be smothered by a brave goalkeeper.

If anything the second half was worse than the first and only really came to life when substitutions were made.

The introduction of Mike Davies and Jake Dillon brought a bit more direction and Davis was unlucky not to score with his first touch, the ball hitting the bar from his close-range volley.

Shortly afterwards, Davis had a great chance to score after a move involving Sam Tucker and Frank Dillon. Again the visiting keeper did well to force Davis out wide and his shot was wide of the post.

With a couple of minutes left in normal time, at last Woodcote secured the three points with an Andy Bullett goal.

Frank Dillon’s first corner was tipped over by the keeper but the ensuing corner was only half-cleared and Davis kept it alive in the box with what can only be described as an “up-and-under”. The ball came down from considerable height and Bullett got their first to head home with his back to goal.

Elsewhere in the league, ROTHERFIELD UNITED went down 1-0 away to HURST in a closely fought encounter. Matthew Wilkin was the home side’s goal hero.

In Division 2, WOODCOTE RESERVES, with a bear 11 players, secured a 2-2 draw away to WESTWOOD RESERVES who remain unbeaten in the league.

Woodcote had even conceded ground advantage in order to get the match played on a weekend of match cancellations due to waterlogged pitches. Adam Cashin-Murray and Craig Antcliffe found the net for the visitors.

The HIGHMOOR U21 against GORING and MAIDENHEAD MAGPIES RESERVES against WARGRAVE games were postponed.

The hosts took the lead early on through striker Karrl Clark, his first for the club, when he charged down a clearance by Newbury’s goalkeeper and fired home.

Newbury’s equaliser came shortly after when Christopher Field made a run before rising highest to head over keeper Tom Hemmett before Rotherfield’s own centre back Luke Whiley had a strike chalked off for offside.

The visitors then doubled their lead through first-half substitute Scott Bowers who latched on to a through ball and lifted it over Hemmett to score with his first touch.

Rotherfield had more of the ball in the second half but were unable to find an equaliser.

Callum Fletcher-Tillen, Daniel Jones and Dominic Nash were cautioned for the visitors while Michael Hunt was carded for the home side.

In Division 4, WARGRAVE RESERVES succumbed to a 4-1 defeat at home to BRAYBROOKE while GORING UNITED RESERVES and TAPLOW UNITED A played out a goalless draw.