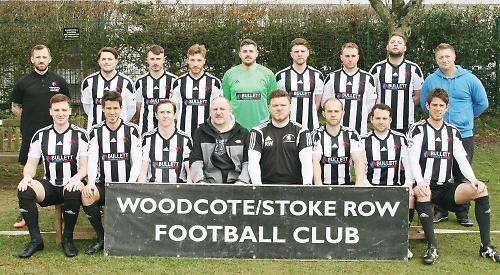 HOME side WOODCOTE/STOKE ROW turned on the style against Premier League basement side HURST last Saturday as they ran out 8-0 winners with Jake Dillon scoring a hat-trick.

The hosts dominated from start to finish and tore into Hurst from the start and were rewarded with a goal after nine minutes. A pinpoint through ball from Andy Bullett put Jonny Summers in the clear and his unselfish pass allowed Jake Dillon to finish from close range.

For the rest of the first half Woodcote battered away at the Hurst defence, the second goal coming on 24 minutes when a poor pass by a Hurst defender was intercepted by Jake Dillon and he squeezed the ball home in spite of a valiant effort by the keeper to keep it out.

In the second half Woodcote ran riot. They made it 3-0 in the 50th minute when Sam Tucker found Jake Dillon on the right and he returned the compliment, playing in Jonny Summers with a diagonal ball which he blasted home.

Three minutes later it was 4-0 when Hurst failed to clear a Sam Tucker corner and the ball fell to Dillon for a tap-in and a hat-trick. This was followed by a series of chances which were thwarted by some good saves by the Hurst goalkeeper. At the other end, Hurst’s only realistic chance brought a save save out of Kane Roberts.

Goal number five came on 75 minutes and involved two substitutes. Ryan Corbett crossed and James Worsfold headed in with his first touch of the ball. Five minutes later Mike Davis, who had gone close on numerous occasions, made it 6-0 with a volley from Jim Hancock’s pass.

It was soon 7-0 as Frank Dillon provided a good finish to Ryan Corbett’s second assist. With the match entering time added on, James Worsfold scored his second with a shot on the turn to make the final score 8-0.

ROTHERFIELD UNITED remain in relegation trouble after going down to a 4-1 defeat against COOKHAM DEAN at Bishopswood.

The hosts were trailing 3-0 at half-time before Craig Sinclair pulled a goal back for Rotherfield from the penalty spot. Cookham went on to score a fourth soon after.

In Division 2 GORING UNITED thrashed basement side TAPLOW UNITED RESERVES 7-1. Alex Fletcher, Jack Murray and Jack Purser all helped themselves to a brace while William Jaycock also got his name on the score sheet.

A Brett Griffin goal earned ROTHERFIELD UNITED RESERVES their third Division 3 win of the season as they won 1-0 at BRIMPTON.

Daniel Carter netted twice as GORING UNITED RESERVES ran out 2-1 winners at TAPLOW UNITED A. The visitors took the lead on 50 minutes with the hosts levelling 10 minutes later. Carter scored the winning goal on 70 minutes.

l A depleted WOODCOTE/STOKE ROW RESERVES side had to wait until the second half of extra time to overcome CORINTHIANS 1-0 in the Reading Challenge Cup. Defender Dave Rook scored the only goal of the match to take Woodcote into the next round.