Schafer is hat-trick hero as side complete memorable fightback 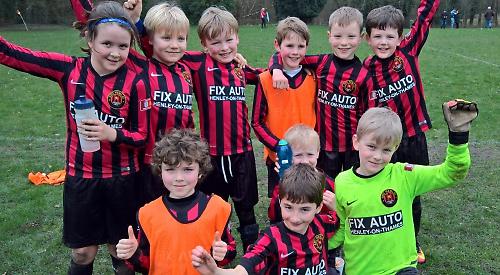 AFC HENLEY HURRICANES U16s made it seven East Berks League Division 2 wins on the spin last Saturday as they ran out 3-1 winners at LAUREL PARK U16s.

The home side went ahead following a pass behind the Henley defenders, Harmer narrowed the angle but the clipped shot came back off the crossbar and was stroked by a supporting forward.

Henley started to build some promising plays in and around the Laurel Park area but the final pass or shot eluded them. Henley then drew level when Jack Earle outpaced a defender to a forward pass and struck a fierce low drive into the far corner.

Henley managed to gain the possession and drive, exemplified by Alex Aldrich in midfield. The visitors’ second half dominance was rewarded when a corner, headed clear, was whipped in by James Goulden for Ryan Lynskey to head home. Laurel Park continued to work hard but the Henley defence and midfield, bolstered now by Emil Rayfield in a holding role, established control of the possession and the match.

Harman Sondh pounced on to a loose ball in the penalty area, sidestepped two challenges and coolly finished to secure the result.

AFC HENLEY HAWKS U12s took a giant stride to winning their league with a 3-1 victory in their top of the table clash with SANDHURST TOWN ROVERS U12s at Jubilee Park.

After a cagey start Dylan Gadson on the right and Jake Heppenstall on the left provided an early opportunity for Tom Horsley to bring a save from the Sandhurst keeper. Moments later Heppenstall’s pass found Horsley, who beat his man, and rifled Hawks into the lead.

The Hawks midfield, with the industry of Jackson Meredith, and speed of Felix Wilson were winning the key battles. Solid defending from Daisy Morgan, Elliott Rowberry, James Grant and William Johnson prevented any meaningful attempts on Alex Wilson’s goal.

Another good move down the right by Gadson saw his pinpoint cross met by Luca Emmanuel for Hawks’ second goal.

In the second half the Hawks fashioned chances for Emmanuel, Wilson, and man-of-the-match Meredith, all denied by the impressive Rovers keeper. A rare slip let in a Rovers striker to spring clear, who, closed down by Daisy Morgan, was finally upended by Wilson in goal for a penalty. Alex Wilson guessed right, but could not prevent the goal. Minutes of good defending by Hawks was relieved by a spectacular third goal by Wilson whose jinking run beat several defenders before neatly finishing for 3-1.

AFC HENLEY HURRICANES U11s fought back to be 4-3 winners in their Division 3 clash at home to MAIDENHEAD MAGPIES U11s.

Fin Shafer in goal for the hosts denied Maidenhead the chance to take an early lead with some fine stops. Henley went close with a couple of neatly floated in corners from Jack Kernick but no one was able to get on the end of them. Jack Rees went close but just put his shot wide of the post. Solid defence from Kernick together with Dan Coles and Harvey Doyle ensured no opportunities for Maidenhead.

Charlie Rolstone’s shot brought out a fine save from the Magpies keeper as the quarter ended 0-0.

Rees moved to goalkeeper and made some fine stops as Maidenhead’s dangerous number nine caused Henley some problems. Eventually the Maidenhead pressure paid off as the visitors took the lead. Whilst Henley continued to apply pressure Maidenhead looked dangerous on the attack and with a mix up in the Henley defence Maidenhead seized their opportunity to go 2-0 at half-time.

In the third quarter Henley Henley were unable to clear a Magpies corner and the ball was poked home from three yards and Henley found themselves 3-0 down with just the final quarter to play.

The Hurricanes continued to press forward and were rewarded when Rolstone and Scampion combined in a move that saw Schafer put Henley on the score sheet.

The goal gave the Hurricanes some much needed belief and they continued to attack and Rial and Freddie Stewart worked a move on the left that pushed Henley into the Magpies area. As the ball came across the area Rolstone saw his chance and pushed his way past the final defender and slotted the ball home. Rolstone found a good pass to put Schafer one-on-one with the keeper and he made no mistake to level the scores at 3-3.

As the game moved into the last minutes Rolstone thwarted a breakaway Magpies attack with a sliding tackle. Doyle picked up the ball and found Schafer unmarked in the Maidenhead box and he pushed the ball past the keeper to wrap up a 4-3 victory.

After a good start Wargrave took the lead after 10 minutes and it was only dogged tackling from the Henley defence that kept them in the game as the visitors continued to attack.

An even second quarter saw some good attacking play starting to build from Henley. Determined running from Oliver Regan created some opportunities but Henley went in at half-time 1-0 down.

Wargrave continued to have more pressure in the third quarter but Henley’s momentum was growing. Eddie Pratt marshalled the defence well and it gave the team confidence going forward. Finally Henley pressure resulted in a penalty and Noah Allen scored from the spot to level the scores.

Henley kept battling away and continued to push forward but were caught on the counter attack and Wargrave finished cooly with a goal five minutes from the end to seal victory.

AFC HENLEY HURRICANES U9s went down to a 3-0 defeat in their East Berks League Cup semi-final at home to HEARTS OF TEDDLOTHIAN EAGLES U9s.

The visitors started well scoring inside the first two minutes with a move down the right wing. Henley battled back well with Alexander Clark creating a number of chances that were well saved.

Throughout the second and third quarters Henley started to dominate with strong midfield performances from Jack Renders, Ben Chapman and Isaac Ahmad. Thomas Ferguson and George Bottomley were solid in defence and repelled numerous attacks. Max Thatcher in goal for Henley saved a penalty in the third quarter to keep Henley in the game.

Into the fourth quarter and a mazy run from Oliver Pratt into the box was nearly converted by Theo Estornel bringing another fine save from the keeper.

As Henley continued to press to find an equaliser, Hearts of Teddlothian scored two breakaway goals to secure their place in the final.

AFC HENLEY HAWKS U9s came back from being a goal down at the end of the first half to win 2-1 at PINEWOOD POLECATS U9s.

Henley were the stronger team in the first quarter of the match, using the width of the pitch well and getting the ball up to attack quickly.

In the second quarter Pinewood had a lot more of the ball and pinned the Henley Hawks back into the final third of the pitch, where goalkeeper Nathan Hendry made some good interceptions and blocks to stop the Pinewood team from scoring.

Henley were struggling to get the ball out of their half and the pressure finally paid off when Pinewood took the lead just before half-time when the visitors failed to clear a corner and the ball fell to a home player outside the box who lofted it back in and over the goalkeeper.

The Hawks made their dominance count in the third quarter when it was their turn to pin Pinewood back into their half. Eventually a through pass inside the Pinewood half found Leo Golledge who slotted the ball past the on-rushing keeper to equalise.

The Hawks went on looking for the winner and this duly came through the right boot of Nathan Hendry when a ball was cleared out of the box and he followed up with a right-footed half volley past the goalkeeper from distance.

Man-of-the-match was Oscar Farr in midfield as the Hawks recorded their first win since Christmas.