Hurricanes' winning run is brought to halt by visitors 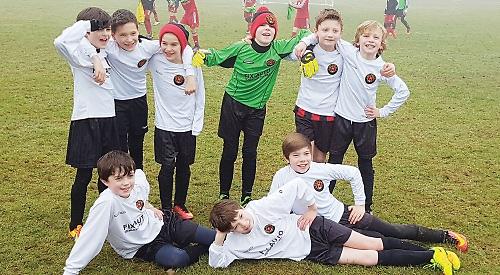 AFC HENLEY HURRICANES U16s’ seven match East Berks League winning run finally came to an end as they were held to a 1-1 draw at home to MAIDENHEAD MAGPIES U16s.

Henley started brightly dominating possession and creating scoring opportunities. Maidenhead worked hard to gain a foothold in the game and gradually gained momentum and started to win the midfield. Chances were created at both ends but the half ended goalless.

The hosts started the second period the brighter of the sides, Harry Greeen bringing some clever touches and passes into Henley’s approach play. But, once again the away side exerted more pressure as the game stretched out.

Henley took the lead midway through the half when centre back Ryan Lynskey rose to head home from a corner. Only good defensive work by Henry Harmer in goal and a Jack Lamboune goal line clearance kept the home side in front.

Henley’s failure to completely clear a bouncing ball in the penalty area gave Maidenhead a share of the spoils when a lob to the far post evaded the defence, providing the equaliser.

The Hotspurs started the match well with Matty Krupa and Sami Morgan both going close in the early exchanges. It was Morgan who got on the end of a corner from the right from Krupa with a bullet header from the edge of the six-yard box to give the Hotspurs the lead.

Enzo Cheesman marshalled the backline well for the hosts but despite this, good play from the Shinfield attack saw them equalise before the end of the first half.

The second half was as evenly contested as the first, but Shinfield went ahead with 50 minutes on the clock with a left foot drive from long range.

The scoring was complete on 65 minutes when a Shinfield attacker fired in from a tight angle after a strong run down the right hand side.

The Hotspurs had opportunities to score through Kai Sabijan and Daniel Clokey, but it wasn’t to be as the visitors held on for the win.

In what was a scrappy game the Hurricanes ran out relatively comfortable winners as the Knights scored a late consolation.

The first quarter was a tight affair with the Hurricanes dominating possession without creating any real chances. Tom Yeoman went close on a couple of occasions but the Knights keeper was able to deal with everything thrown his way.

In the second quarter the hosts took the lead as Tom Yeoman beat a couple of players before playing the ball through to Sam Winters who made no mistake from eight yards out.

In the third quarter Tom Atkinson and Finnbar Scott were both active down the flanks and created a number of chances for striker Tom Bonser.

In the last quarter Joe Turner was snuffing out all the visitors’ raids and setting up the Hurricanes’ attacks as his intelligent play freed up the hosts to go on the offence. It was striker Luca Thomson who was the Hurricanes’ knight in shining armour as he netted after an accurate kick from keeper Ben Horner, who had had little to do until this point. Horner was unlucky to concede late on as he pulled off a good save only to see the Knights score off the rebound.

The first quarter was a tight affair as both sides probed for the opener. Olly Saunders donned the gloves for the first half and pulled off some fine saves and blocks.

Sam Winters and Tom Yeoman drove the Hurricanes forward from the centre of midfield in the second quarter but there was nothing they could do to prevent the Rangers going 1-0 up after a well put-together move.

Saunders was unsighted as the hosts scored from a free kick to leave the visitors with a mountain to climb. Nicolai Bruun-Andersen almost hit back immediately but his well struck shot just flashed wide.

Just as the Hurricanes were getting back into the game a harshly awarded free kick also went in to give the score a lop-sided look. The visitors conceded again late on as they recorded their heaviest defeat of the season.