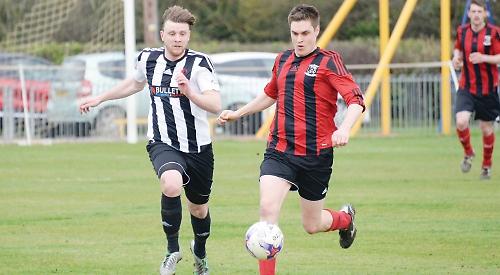 In a scrappy game of few chances and not a lot of goalmouth action a weaker than usual visiting YMCA side found themselves off the pace and getting penalised for a series of late tackles.

Woodcote were also out of sorts and were unable to capitalise though they did go close through headers from Sam Green and Jim Hancock.

It was hard to see where a goal was going to come from until YMCA were awarded a penalty on the half-hour mark, after Sam Green was adjudged to have brought down a visiting attacker. The penalty was duly converted for 1-0.

The second half saw a bit more purpose from both teams with YMCA creating a couple of good chances but failing to hit the target. Midway through the half Woodcote replaced Mike Davis and Jonny Summers with Jake Dillon and James Worsfold and this soon proved decisive. A Frank Dillon free kick caused havoc in the YMCA defence and the ball eventually looped up to Worsfold who had the simplest of tasks in heading home from less than a yard.

On 80 minutes poor defending by Woodcote enabled YMCA to restore their lead with a forward rifling home in a packed area after several opportunities to clear had been missed by the home defence.

A match which had been played in a reasonable spirit had one flashpoint which saw a player from each side shown a second yellow card and sent off late on.

In Division 4 GORING UNITED RESERVES went down to a 2-1 defeat away at BERKS COUNTY ROVERS. The hosts had raced into a 2-0 lead before the visitors pulled a goal back five minutes from time courtesy of an own goal.