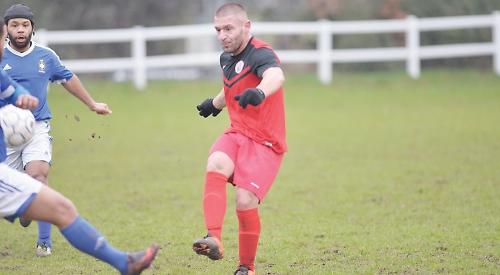 READING Senior Cup holders Henley Town crashed out of this season’s competition at the quarter-final stage as they went down 3-1 against Wokingham and Emmbrook at the Triangle Ground on Monday evening.

Although this match was played at Henley’s ground it was actually a home game for Wokingham who haven’t got floodlights at their Lowther Road ground. The game was played in front of one of the biggest crowds at the Triangle ground this season with Wokingham having by far the most supporters.

The Red Kites were forced to make several changes due to injuries and work commitments against a Wokingham side who have hit top form recently.

The Tangerines attacked from the kick off and Garry Aulsberry in the Town goal had to be alert and made several good saves.

Wokingham took the lead in the seventh minute through Matt Booth. Henley’s Seve Mayberry had to go off in the 30th minute with a groin injury and was replaced by Reece Bucket.

In an end-to-end match the Red Kites eventually qualised on 40 minutes through Seun Odesanya. Wokingham restored their advantage three minutes later when Booth scored his second of the game.

The game continued to be fairly even in the second half with both sides creating chances. The turning point of the game came on 67 minutes when Henley were reduced to 10 men after Liridon Daka was dismissed for remarks made to the referee.

Wokingham scored a third in the 76th minute when Henley central defender James Griffiths diverted a shot past Aulsberry for an own goal.

HENLEY Town slipped to their 23rd Uhlsport Hellenic League Premier Division defeat of the season last Saturday as they went down 3-0 at The Elms against Highworth Town.

The home side dominated the match from start to finish with the Red Kites having their defence and keeper Garry Aulsberry to thank for keeping the score down.

The hosts took the lead after nine minutes when Nathan Gambling netted from eight yards out.

Kieron Gleed doubled the home side’s advantage on 59 minutes before Aysa Corrick wrapped up the scoring two minutes from time when he converted from the penalty spot.

Five yellow cards were issued throughout the match, three for the home side and one each for Henley Town’s Liridon Daka and Seun Odusanya

The win completed the double for the hosts who had defeated Henley 3-1 at the Triangle Ground back in November.