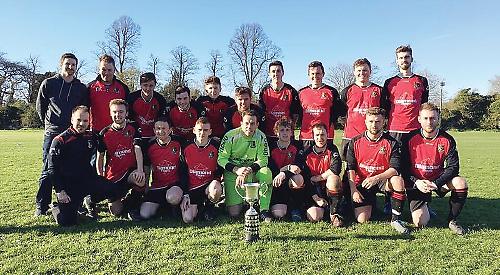 A FINE sunny Saturday afternoon in Abingdon saw this year’s NBFL Division 3 champions Watlington Town arrive at Saxton Rovers in anticipation of finally getting their hands on the league trophy that they had secured in such dramatic fashion the week before at Wallingford.

But before the formalities, there was a match and three more league points to play for, as Town completed their season an unassailable five points clear of nearest rivals Benson Lions, while Saxton were playing their penultimate game and looking to secure a fourth-place finish. The visitors started brightly and were soon ahead when William Wright stole forward early on and slotted the ball in the corner for 1-0.

However, town were pegged back when captain Jon Little was adjudged to have fouled an opponent in the penalty area off the ball and Saxton converted the resultant penalty.

Then the tide turned and an error in the town defence then allowed Saxton to poke home a second goal, and Watlington’s party look to have been well and truly flattened when Saxton headed home from a free kick to make it 3-1 to the home side.

Town replied through a close-range Adam Holloway finish to reduce the arrears to 3-2 before half-time.

Watlington were determined to go out on a high and soon equalised at 3-3 early in the second half through Ben Little’s penalty. But a fourth goal conceded just a few minutes later once again left them with a mountain to climb.

Saxton managed to hold on until the end but for town it didn’t dampen the celebratory mood one bit as they finally got hold of a league winners’ trophy for the first time in 20 years to seal what has been a fantastic season for the club.