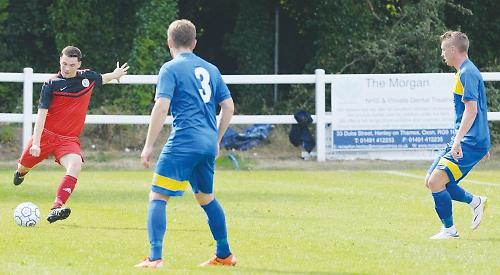 HENLEY TOWN entertained Purton in the third round of the Bluefin Sports Supplementary Cup at the Triangle ground on Tuesday night.

The kick-off was delayed because the Red Kites’ young defender Sam Nowell dislocated his right knee in the pre-match warm up and an ambulance had to be called.

The Wiltshire side made it hard for Henley’s young side with their direct and physical style of play and the home side had to make another change after three minutes’ play when Ajith Pragbha, who was making his debut, had to go off with a leg injury to be replaced by Liam Tindall.

The game was end-to-end and Purton keeper Max Schofield made a good save from Jake Henley then in the 20th minute the Red Kites had a corner on the right and Chris Bryne came in from the left to connect to beat Schofield to take the lead.

The visitors then battled hard and had a period when Henley keeper Gary Aulsberry had to make several good saves to keep his side in front up to the half-time interval.

The second half commenced as the first half ended with both teams looking to make an impact on the game. Purton levelled the scores on the hour when Jamie Sheppard made it 1-1 after a mix up in the Henley six yard box.

Both teams tried to get the winner to save the game going into extra time and fortunately Callum Carlisle’s shot in the 76th minute was deflected past the agile Schofield to send Henley into the quarter-finals.

l Henley Town went down 3-0 away to Brimscombe and Thrupp in their UHL Hellenic Premier Division clash on Saturday. The hosts scored all their goals in the first half with Ed Mayor bagging a brace.