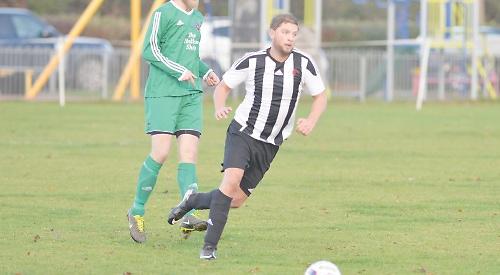 WOODCOTE/STOKE ROW battled for 120 minutes to claim their second Hellenic League scalp of the season in the Reading Senior Cup quarter-final at Finchampstead on Saturday.

Having disposed of Highmoor/Ibis away in the previous round, the Thames Valley League side showed determination and resilience against a side having a successful season in Division 1 East of the Hellenic League.

It did not look good for the visitors when, after a nervous start, they conceded a goal in the third minute. The ball was not cleared and a mix-up in defence allowed a low cross from the right and a close-range finish to give the hosts a lead.

Within two minutes Woodcote had levelled the scores. Frank Dillon got away from his marker down the left and his cross was met by James Worsfold whose header gave the home keeper no chance.

The goal gave Woodcote confidence and, although much of the play for the rest of the half was rather scrappy, the visitors had a couple of half-chances while Finchampstead had at least one good chance to restore their lead.

The second half proved goalless with few real chances at either end, though Woodcote enjoyed more possession. The nearest thing to a goal came in the last minute when Tommy Chapman just missed the target with a shot.

In the first half of extra time Woodcote had two chances to take the lead. First, Sam Green went close with a header from Tommy Chapman’s cross and then Jonny Summers had a great chance from Frank Dillon’s pass, but, with the goal at his mercy and a tap-in almost inevitable, he somehow managed to miss the ball completely.

With five minutes of the second half of extra time left, Woodcote were awarded a free kick 30 yards out. Andy Bullett launched the kick into the Finchampstead area, the defence failed to clear decisively and the ball fell to Jake Dillon whose shot was blocked. The ball reached Frank Dillon who took one touch and then calmly placed a low left-footed shot wide of the despairing keeper and into the net.

In the final five minutes Finchampstead were unable to create any real goal threat as Woodcote progessed to the last four of the competition where they face last season’s losing finalists Binfield.