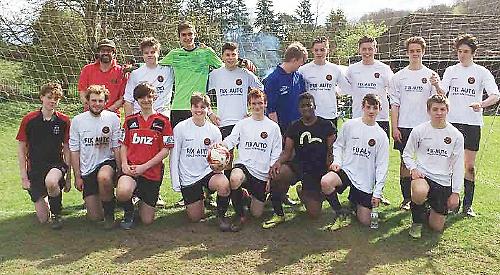 Following a goal conceded at a corner, a fine pass from Calum Hoskins put Lewis Coles through who calmly passed the ball past the keeper to level the scores. However, another defensive lapse saw the Kites go into half time 2-1 down.

In a classic game of two halves, the Kites scored three second half goals with Sam Allen scoring two headers from Hoskins corners.

Woodley temporarily came back into the game as a shot deflected off the head of Allen over the despairing leap of Ellis Dombey. The final score came from Lewis Coles who smashed the ball past the keeper to win the game for the Kites.

AFC HENLEY HOTSPURS U12s brought their season to a close with a dominant performance over ASCOT UNITED ARROWS U12s as they ran out comfortable 3-0 winners.

The Hotspurs created several chances in the first 10 minutes but were unable to convert them. After 15 minutes a sweeping move involving Marc Sheriff and Theo Lock found Louis Swinburn-Johnson at the far post to drive the ball home.

Stand-in centre forward Jo Jo Barry showed good energy when he came on, putting the Ascot back line under pressure and added two close-range striker’s finishes to put Hotspurs 3-0 up before half-time.

Henley continued the second half as they finished the first by dominating possession and passing confidently. Man-of-the-match Tom Vockins continued to put the Ascot defenders under pressure down the left hand side and created several chances, but the visiting goalkeeper pulled off a string of impressive saves.

The hosts started brightly in the first quarter as striker Joe Turner clipped a shot past the post and Nicolai Bruun-Andersen went close.

Iin the second quarter as the hosts fell behind. The Comets had a breakaway attack as Tom Atkinson raced back to defend. As the Comets’ attacker drove into the box Atkinson’s hand made the slightest contact with his shoulder, their heels clipped and the referee gave a penalty. Ben Horner had no chance with the resulting penalty kick as the Hurricanes went in 1-0 down at half time.

Matters did not improve in the third quarter as Finnbar Scott turned the ball into his own net as the Hurricanes found themselves 2-0 down.

Atkinson went close for Henley when he rattled a shot against the inside of the post only to see it spin away from the net. Man-of-the-match Tom Bonser was the shining light for the hosts through his tireless running and tracking back. The Hurricanes then found themselves 3-0 down at the start of the fourth quarter after a well-worked goal from the Comets.

The Hurricanes managed to get a goal back after some good work by Tom Yeoman who battled past a couple of players and got his shot away that was well saved by the keeper and showing all his predatory instincts Turner was there to neatly sweep the ball into the net.

AFC HENLEY HURRICANES U9s were held to a 0-0 draw by BERKS COUNTY SWORDS U9s last Saturday despite dominating all four quarters of the game and hitting the post four times.

The Hurricanes, having being promoted at Christmas to the third tier of the East Berkshire League, started well with a promising move from Jack Renders down the right wing forcing the keeper into a good save from a volleyed shot from Ben Chapman. The Hurricanes continued to press with another powerful shot from Jack Renders hitting the crossbar and bouncing on to the goal line.

Into the second quarter and Theo Estornel made a number of penetrating runs down the left wing beating a several players and releasing Ben Chapman for a one-on-one with the keeper which again was well saved. Oliver Pratt on the right wing created a number of chances and hit the post with a shot from distance.

Only in the final quarter did Berkshire County Swords offer any threat with their only shot forcing a great save from Max Thatcher in goal. George Bottomley and Isaac Ahmad in the Hurricanes defence were solid throughout the game, with Ahmad winning man-of-the-match award for his fine tackling.