Pupils given tour of Royals' stadium in reading initiative 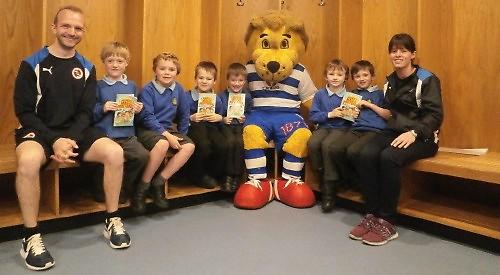 CHILDREN from a Wargrave school were given a tour of Reading FC’s Madejski Stadium as part of a reading initiative by the club.

The six pupils from Robert Piggott Infant School in Beverley Gardens were shown around the stadium on Tuesday last week.

They went in the players’ changing rooms, the dugout and the corporate boxes in the main stand.

This term, the children have been reading Frankie vs The Mummy’s Menace, part of the Frankie’s Magic Football series written by former Chelsea and England footballer Frank Lampard. Rob Dickinson and Faye Turner, from Reading FC’s Community Trust, visited the school to read to the children each week before organising the stadium tour, where they read the final chapter in the changing rooms with club mascot Kingsley the Lion.

Jay Thornton, seven, said: “It was very exciting. We all had a fabulous time. We would like to say a big thank-you to Reading Football Club, especially Rob and Faye, for reading with us this term and giving us such a special day out.”