Donegan at the double as Emmer Green secure points on travels 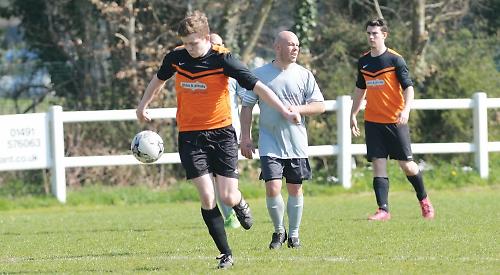 EMMER GREEN came from a goal behind to secure all three Senior Division points at lowly BURGHFIELD on Sunday in a match that saw the hosts have three players sent off.

In an even first half the hosts took the lead from a breakaway goal against the run of play. Emmer Green soon equalised with a penalty from Dan Donegan before Burghfield had a man sent off for a reckless challenge just before half-time.

Emmer Green gave debuts to youngsters George Fontaine and Liam Lukeman and both made an immediate impact on the game.

In the second half Emmer Green were on top as they took advantage of the extra man and made it 2-1 when Lukeman lobbed the keeper.

Lukeman came close to a second when he went through but the Burghfield keeper saved the shot outside the box and was sent off.

Burghfield had another player sent off when Dan Donegan went through from a well-timed pass from Ben Gonzales and was brought down. Donegan netted his second from the spot to wrap up the 3-1 win.

In Division 1 basement side SC UNITED narrowly went down 3-2 against WOODLEY UNITED at Bishopswood.

High-flying HENLEY TOWN eased to a 4-1 Division 3 East win at the Triangle Ground against PARK VILLA.

The visitors took the lead when a long ball over the top of the Henley defence saw a Villa striker score into the bottom corner.

Henley hit back when Tom Essam headed home a Thomas Chaplin corner to level the scores.

Aaron Brittain put the hosts ahead when he chased down a long ball before calmly beating the Villa keeper.

Ash Tickner won the ball in the Henley half and played it out side to Steve Kennedy who broke down the right wing, beating a defender before finding Tickner on the edge of the box who fired home his side’s third goal of the match.

Henley wrapped up the scoring when good work from Arran Finch released Birtain who backheeled to Finch who completed a neat one-two down the channel. Brittain collected the ball burst on into the box beating his man and squaring again to Finch who netted Henley’s fourth of the game.