Blumire fires hat-trick as Cannons are silenced by Hawks 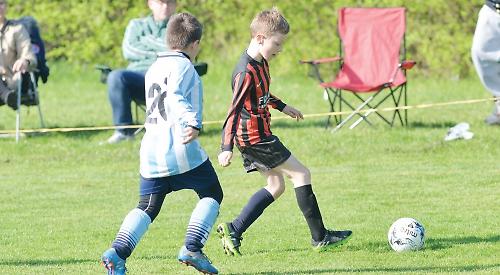 Henley were immediately put on the back foot and they had to endure a series of corners that the hosts struggled to deal with and clear out of the box and it was from one of these that Bracknell took the lead.

This setback spurred the Hawks into life and Millie Blumire got them back in the game with good work down the right wing, which ended with a cross shot flying over the Cannons’ keeper to make it 1-1.

The Hawks started to get a grip on the game through playing some good passing football which resulted in a one-on-one opportunity for striker Joshua Bentley to
slot home from inside the box to give the hosts the lead.

Almost instantly Freddie Coultas did some good pressing on the left wing, dispossessed the Bracknell player, and delivered a left wing cross which was finished by Blumire on the half volley to give the Hawks a 3-1 lead at the end of the first quarter.

The second quarter passed by without any changes to the score, with the Hawks continuing to play some good passing football. Bracknell got themselves back in the game in the second half through a long range shot which went over the Hawks keeper.

Bracknell proceeded to push further and further forward in search of more goals but goalkeeper Finn Walsh and captain Nathan Hendry did their best to thwart the visitors with last-gasp blocks and clearances.

Late in the third quarter, another one-on-one chance fell to Bentley who made no mistake to put the Hawks 4-2 up.

The ebb and flow of the game continued in the final quarter as Bracknell looked to get forward at pace whilst the Henley team continued to pass the ball around finding opportunities to get the ball forwards. Bracknell pulled a goal back to make it 4-3, before Henry Allingham scored his first goal of the season with a right footed shot into the bottom
corner from just inside the box.

There was just enough time for Bracknell to get another goal and also Blumire to complete her hat trick after cutting in from the left wing and firing a shot over the goalkeeper from a tight angle to make it 6-4.