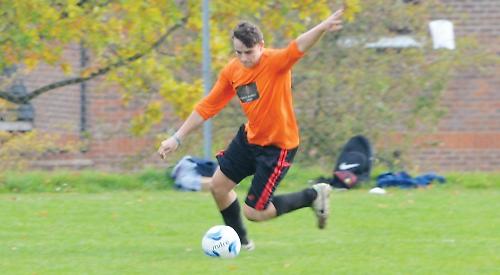 EMMER GREEN secured all three Senior Division points from their penultimate game of the season at TILEHURST CLUB.

The visitors started well and were soon ahead after Ciaran Crean passed the ball down the left wing to Luke Donegan who laid the ball to Daniel Donegan to strike home into the bottom corner.

Emmer Green doubled their lead shortly after with a trade mark Daniel Donegan free kick to put the visitors ahead at half-time.

Tilehurst Club got a goal back early on in the second half and both teams threatened. Daniel Donegan saw a shot hit the post and Luke Donegan also had chances to extend the visitors’ lead but failed to convert.

Emmer Green lost Chris Read to injury in the 80th minute but stood firm and hung on with 10 men to secure the points.

SC UNITED, bottom of Division 1, ended their campaign with a 6-2 defeat at second-placed ELDON CELTIC.

The visitors took the lead when Kieran Butler latched on to a loose ball in Henley half and drove forward before passing to George Chaplin in midfield who cut back then hit a cross-field pass in behind the back four releasing Thomas Chaplin who slotted into the bottom corner.

Henley made it 2-0 when Jack Beales won the ball in defence and broke forward before releasing Aaron Brittain down the left wing who beat a defender before playing in Hugh Barklem who turned his defender before scoring into the bottom right corner.

Beales then won the ball in midfield and played a ball in behind the defence where a Rangers player stretched out a leg to score an own goal.

The visitors went 4-0 up when George Chaplin ran through the midfield and played the ball out to Ash Tickner who cut in on to his right foot before sending a shot in past the keeper.

Josh Collins made it 5-0 when he got on the end of a Chaplin corner and soon after Tickner played in Barklem who beat several defenders before scoring his second of the game.

After clearing a corner and Tickner picked the ball up and turned his man inside his own half before bursting 40 yards and playing a ball inside the back four releasing Barklem who clipped the ball over the keeper to complete his hat-trick.

Chaplin rounded off his man-of-the-match performance when he took control of a loose ball before playing an inch perfect pass to the back stick for Barklem to send a volley into the top corner for his fourth and his side’s eighth of the match.