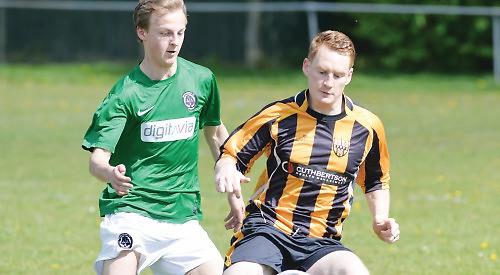 The visitors enjoyed the best of the early possession but conceded when Guy Bickerton was adjudged to have pushed a Berks County attacker as a corner was played in and the visitors converted from the resulting penalty kick.

United equalised from a Markland Tidswell corner that was headed in by Simon Frost. The visitors then took the lead when Guy Bickerton’s cross went all the way in without a touch.

In the second half United continued to look the better team but Berks County equalised when a cross was turned into his own net by skipper Jordan Cuthbert.

Rotherfield regained the lead when Patrick Gardner converted a penalty. The visitors could have stretched the lead as Ed Bickerton was fouled in the area, but this time Gardner could only strike the crossbar from the penalty spot.

United had further chances to extend the lead but couldn’t take them and were thankful when goalkeeper Grant Wildish made a fine save at the end of the game to allow them to take all three points and secure their second league win of the season.

Rotherfield United play their final match of the season on May 6 when they entertain local rivals Woodcote/Stoke Row.

In Division 2 WOODCOTE/STOKE ROW RESERVES suffered a 1-0 defeat at home to BURGHFIELD with the only goal of the match being scored in the 50th minute.

GORING UNITED RESERVES came from 4-1 down at half-time to secure the share of the spoils in a 5-5 draw at Division 4 promotion chasers BRAYBROOKE.

Jack Murray netted twice whilst Patrick Dyer, Daniel Reynols and Jamie Taylor were also on target for the visitors.