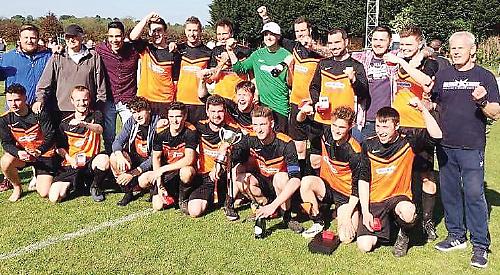 HUGH BARKLEM was the hat-trick hero as Henley Town won the Ted Cambridge Cup against Reading United at Scours Lane on Sunday.

Henley took the lead when good play in midfield from Dan Hayden and Aaron Brittain playing a one-two led to the ball finding Sam Earl who played it down the wing to Brittain who broke clear into the box and crossed for Barklem to crash the home.

The lead was doubled soon after when Thomas Chaplin floated a corner into the front post where the ball broke across the six yard box for Barklem to pounce on and fire home.

Kieran Butler then won a ball in midfield for Henley and George Chaplin took it under control before sliding it inside the fullback and Barklem ran through before curling a shot into the bottom corner to complete his hat-trick.

United pulled a goal back when a ball into the box broke free for a striker to fire home.

Reading pulled the score back to 3-2 when a several shots were blocked by Henley defenders before the ball broke free to a United striker to reduce the arrears to just one goal.

Henley held on to secure the win and the cup against the Reading and District Sunday League Division 3 East champions.