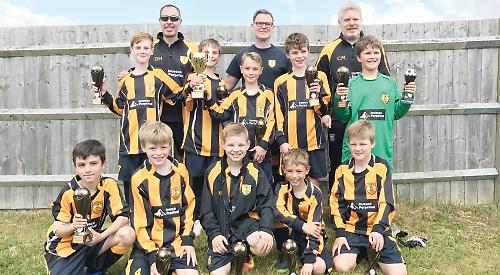 An early goal from Jake Wilde helped to settle the nerves of the Scorpions but Burghfield always looked dangerous. Burghfield defended well and broke quickly on the counter attack which put the Scorpions under pressure.

Despite all this good play, Taplin added a second goal late in the first half, following up well to slot home.

The second half again started brightly, Burghfield looking lively as they continued to pile on the pressure, and forced a good save from Freddie Sayer, the Scorpions keeper, who managed to preserve Rotherfield’s lead.

Rotherfield responded well and almost extended their lead after a strike by Max Hartin rattled the Burghfield crossbar. With 10 minutes remaining good interchange of passes by Rotherfield put Taplin through on goal, who held off the last defender and finished well to grab his brace. This was the end of a fine season for the Scorpions, having lost only one game in almost a year and receiving the trophy from the
league for the most developed team.