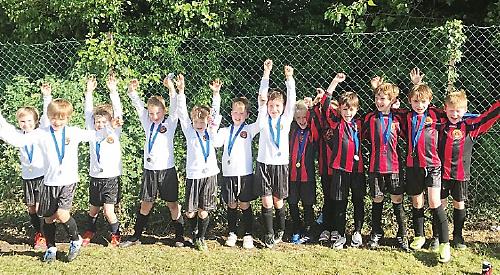 TWO AFC Henley U7s sides put in impressive displays in their first ever tournament away from Jubilee Park last weekend as they competed in the Marlow FC summer tournament.

The Henley squad was split into two different teams of eight players, to compete in friendly matches between eight teams. Each of the Henley’s teams, Hurricanes and Hotspurs, played four matches, all 10 minutes in duration.

The Hurricanes’ first game saw them win 1-0 thanks to a Leo Palmer goal straight from a corner. In the second match the Hurricanes went 2-0 down but managed to pull one back quickly through Isaac Walmsley to make it 2-1 but they couldn’t get an equaliser.

The third match saw a well battled 1-1 draw with the Henley goal coming from Harry Biggs from a tight angle and in the final match an Arthur Bottomley goal gave the Hurricanes a 1-0 win.

Meanwhile the Hotspurs won their first match 1-0 thanks to a Charlie Cooper goal. Cooper was on target twice in the second match which Henley won 2-0 while in the third game George Beesley, Charlie Myers and an Archie Butlin header saw the Hotspurs triumph 3-1.

In the final match the Hotspurs won 1-0 thanks to a Raiph Surplice goal in a match that saw goalkeeper Oliver Burton-Mezo pull off a good save.