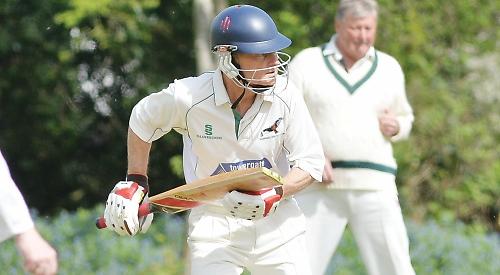 In Division 1 PEPPARD STOKE ROW 2nds crashed to a five wicket defeat at IBIS MAPLEDURHAM on a pitch where the uncovered wicket had been underwater the previous evening and was only just playable.

The game got underway only slightly late and Ibis Mapledurham, having won the toss, elected to bowl first.

Gerry Bacon and Don Townsin found it heavy going against a pacey attack and, after two overs, the players came off the pitch for an hour due to a heavy downpour. When play resumed the duo established a 50 run partnership until Bacon was caught off Errol Masters and Townsin followed two balls later with a leading edge back to Chad Cudjoe.

Ollie Nicholson added to the woes by failing to clear long on from his first ball. Rob Simmons and James Hern then struggled with the latter facing few balls.

The late order had little time to contribute in the reduced 36 overs and 143 runs looked light, even in difficult conditions.

Opening batsmen Ambit Singh and Will McKay quickly provided the foundation to the innings with Dave Drury adding 48 until completely missing a Mick Chard senior slower ball. The damage had been done and despite Chard’s 3-27, Ibis cruised home in 31 overs.

Elsewhere in the division GORING ran out narrow winners at FARLEY HILL in a reduced overs match due to the wet weather.

The hosts on the toss and put Goring into bat first where the visitors put on 115-8 off their 32 overs with Nikhil Kulkarni top scoring with 40. In reply Farley Hill were bowled out for 111 with James Major impressing with figures of 4-19.