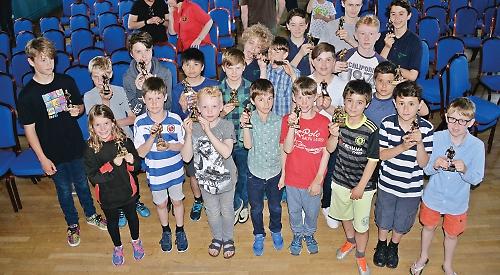 MORE than 200 parents and children attended AFC Henley’s presentation awards night at Henley town hall on Wednesday last week to celebrate the achievements of its teams and players from the 2016/17 season.

Awards were presented for each of the 21 teams in the categories of Player of the Season and Most Improved Player. Club awards were given to the top goalscorers in each of the three formats, 7, 9 and 11-a-side.

Alec Steel won the 7-a-side award for his 22 goals scored in the U10 Hurricanes. Barnaby Burletson’s 23 goals were enough for him to win the 9-a-side award and Georg Gudjohnsen-Mitchell’s 40 goals took the top scorer award for the 11-a-side teams.

Club person of the year was awarded to Samuel Bell for his work developing the after school clubs and the midweek player development centres.

Chairman Trevor Howell reported that in its 43rd year AFC Henley recorded income of more than £100,000. The not-for-profit organisation is predominantly run by about 100 volunteers.

The club now has more than 330 players in 21 teams between U9 and U18 playing in the East Berkshire Football Alliance. It also runs a successful mini soccer centre on Saturday mornings, which is regularly attended by about 80 players each week.

The club still has space for players next season in many age groups and are keen to welcome more players from U5 up to U18s.

For more information and to join, visit www.afchenley.com or email membership@afchenley.com