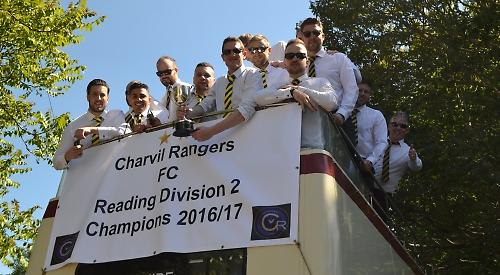 A FOOTBALL team from Charvil held an open-top bus parade after winning their league.

To mark the achievement, the club hired a bus to take the team, plus the cup, from Twyford to Reading on Friday.

The players dressed in shirts and ties in the club colours of yellow and black and displayed a banner on the bus which read: “Charvil Rangers FC Reading Division 2 Champions 2016/17.”

People lined the streets to cheer the team, who let off a yellow smoke flare as they set off from the Duke of Wellington pub, which sponsors the club, in the village. They stopped at several pubs en route, including the Wee Waif in Charvil, and met colleagues at offices in Reading before returning to Twyford.

They sang We Are The Champions by Queen and We Are Going Up and showed off the league trophy.

Manager John Rimmer said: “It was a wicked afternoon. We had a really good reception all through Reading and with what had gone on in Manchester a few days before it was nice to see that unity.

“We have had a good season. We had won only one game by Christmas but we went on a run and a couple of months before the end of the season we said it would be funny to do an open-top bus tour if we won the league. Usually you only do that if you win the FA Cup or something.

“It was a really good way to cap off the season and keep everyone together and playing next season. Team morale is good anyway but these are the sorts of days you remember for a long time.

“I’d like to thank our sponsors, the Duke of Wellington and Twyford Barbers.”

Following a restructure of the league, the club has since been moved up again and will play in the Premier Division next season.

Mr Rimmer said: “It’s a tough ask but if we keep these players I see no reason why we can’t finish in a good position.”