Groundsman of year accolade for Higley 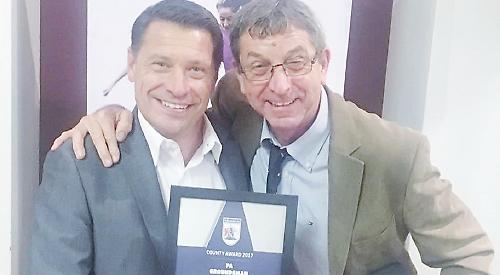 STUART HIGLEY picked up the groundsman of the year award at the Oxfordshire FA’s award evening held at the Kassam Stadium.

The Woodcote/Stoke Row FC groundsman, who lives in Croft Way, has been with the club since he started as a player in 1970 and his unstinting voluntary efforts have seen the pitch improve year on year to become one of the best pitches to play on in the county.

Higley was presented with a plaque and certificate by guest-of-honour, Tony Cottee, the former West Ham and England striker.

The winning groundsman was nominated for the award by club chairman, Pete McAlister. Higley only realised he had been nominated when he received a call from Andy Gray, head groundsman at Southampton FC, asking if he could come and look at the pitch. Higley and Gray met on the pitch and a recommendation from this top-professional groundsman saw the Woodcote/Stoke Row man scoop the coveted award.