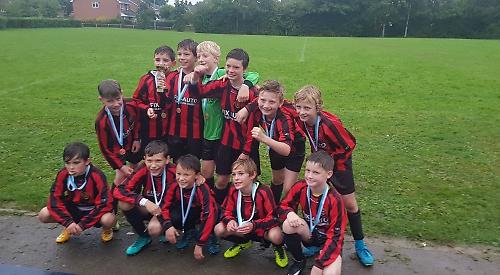 THE U11 Henley Hurricanes blew away the storm clouds to lift the FC Bracknell Tournament Cup last weekend.

In a five-team round robin tournament the Hurricanes went throughout the whole day without conceding and scored 15 goals in the process.

Their first game was their hardest as they faced old foes and Division A rivals the Whitegrove Knights.

Captain Luca Thomson led the way with a towering performance from the back and he was joined in defence by tough tackling duo Joe Turner and Oliver Saunders.

Ben Horner dealt with everything that was asked of him in the Hurricanes goal and with the industrious Nicolai Bruun-Andersen in centre midfield, chances for the Knights were few and far between as the solid defensive platform allowed the Hurricanes to attack.

First on the score sheet was Tom Bonsor as he lashed in off the crossbar from 15 yards out before Tom Atkinson played in Tom Yeoman with a 20-yard chip and Yeoman finished clinically as the Hurricanes ran out 2-0 victors.

In the second match the Hurricanes faced Whitegrove FC and ran out 3-0 winners as Bonsor continued his hot streak as he notched twice with a couple of lethal strikes before summer signing Daniel Choi cut in from the right wing to complete the scoring. In the third match the Hurricanes faced FC Bracknell Royals and it was Choi who netted twice after some tenacious tackling in midfield.

Andersen was pushed into a more attacking role and this soon bore fruit as he glided past a number of tackles before slotting past the Bracknell keeper as the Hurricanes ran out 3-0 winners.

In the last match they faced Finchampstead Mavericks and it was the Hurricanes that created a storm of their own with their most impressive display of the day.

Atkinson also scored twice before Turner added a sixth with a well-placed shot and Finnbar Scott scored from the penalty spot to finish off the scoring in a 7-0 rout.

The Hurricanes lifted the trophy boasting a 100 per cent record on a rain-sodden afternoon in front of their supporters.