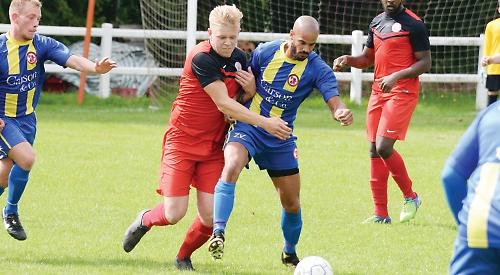 HENLEY TOWN, playing their fourth away match in five games, lost out at Holyport on Tuesday night in Division 1 East of the Uhlsport Hellenic League.

On a wet and windy evening the Red Kites put in a spirited performance which belied their league position with the final scoreline flattering the hosts.

Holyport took the lead in the 20th minute when they cleared from a Henley corner and broke away for Paul Rake to slot the ball past a helpless Mariah Cosman in the Town goal.

The game was then end to end and fairly even with both sides having chances.

The home side went further ahead in the 58th minute when Samuel Whitfield found space at the far post to head home a left wing corner.

Henley still kept battling away as Fraser Mowat had a shot from distance well saved by the Holyport keeper. Chris Hood was fouled on the edge of the area and he got up to take the free kick which the keeper dived to palm round the post.

The Red Kites were reduced to 10 men for the final moments of the match after Loridon Daka was sent off of for retaliation in the 86th minute.

Despite another loss Henley manager Jock Mowat felt the general performance was good and the players he is bringing in are improving the side. The result leaves the Red Kites 12th in the table.