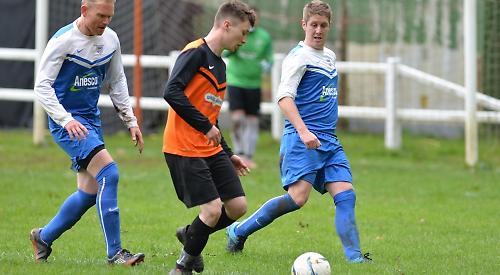 Elsewhere in the division EMMER GREEN’S home match with TILEHURST CLUB was abandoned at half-time by the referee following an altercation with members of the visiting side.

At the time the match was abandoned Emmer Green were leading 5-0 with goals by Ryan Adams (2), Jordan Cox, Daniel Donegan and Johnny Adey.

In Division 1 HENLEY TOWN lost out 4-3 at home to WOOLHAMPTON.

The visitors took the lead from a corner that was headed home. Woolhampton almost scored almost immediately afterwards from another corner but Charlie York in the Henley goal tipped the ball over the bar.

Two consecutive corners from Henley put the visitors under pressure before Tom Essam put a long throw into the box where Dan Sykes flicked on for Jack Beales to sweep home from six yards.

The visitors re-took the lead when they scored direct from a corner. Woolhampton made it 3-1 when their striker shot from outside the box and found the bottom corner of the Henley goal.

Soon after Henley conceded a penalty which Woolhampton converted to make it 4-1.

Henley pulled a goal back when the ball was played into Woolhampton box and it came loose to Hugh Barklem who fired home.

Moments later Arron Finch sent a cross into the back post where Barklem was on hand to head home.

Elsewhere in the division SC UNITED crashed to a 4-2 defeat at SPENCERS WOOD.