Dillon's hat-trick helps fire side to top of the league 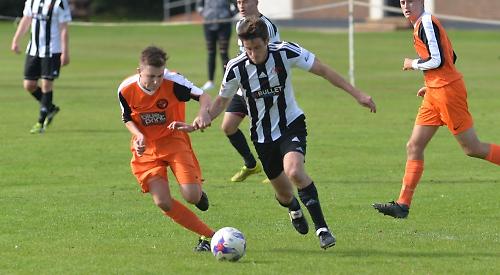 WOODCOTE/STOKE ROW got back to winning ways and regained top spot in the Premier Division thanks to a 5-3 home win against WOKINGHAM AND EMMBROOK last Saturday.

A good-sized crowd saw Jake Dillon score a hat-trick while his twin brother, Frank, was also on target. The final goal came from substitute James Worsfold.

A young and enthusiastic Wokingham team shocked the home side by taking the lead with an early penalty. Woodcote equalised through Jake Dillon after 33 minutes and less than a minute later Frank Dillon scored to make it 2-1. Wokingham hit back and equalised before the break.

Jake Dillon completed his hat-trick with goals in the 63rd and 72nd minutes to make it 4-2, but Wokingham hit back to make it 4-3 before James Worsfold completed the scoring after 78 minutes.

ROTHERFIELD UNITED are still searching for their first Division 1 win of the season after crashing 4-3 at home to BURGHFIELD.

Simon Frost, Tom Candish and Aaron Attfield were on target for the hosts who appeared to heading for a point until the visitors netted the winning goal a minute into injury time.

United took raced into a 2-0 lead with a brace by Fuller after 15 and 20 minutes. Jack Purser made it 3-0 on the half-hour mark before Tom Purser added his side’s fourth five minutes later.

Fuller completed his hat-trick on the hour mark while Jack Purser made it 6-0 with his second of the game soon after. George O’Brien wrapped up the scoring five minutes from time.

HENLEY TOWN RESERVES picked up their first win of the season as they eased past visitors BRAYBROOKE with a 4-0 victory. Despite having to field a new-look defence due to injuries, Henley started brightly with Nico Cheesman going close to opening the scoring on two occasions.

Henley took the lead on 25 minutes when Arron Finch won the ball in midfield, exchanged passes with Cheesman, before unleashing a shot into the top corner of the Braybrooke goal.

Moments later Finch was denied his second of the game as he saw his long-range shot rattle the crossbar.

Late in the half the visitors came back into the game but could not find a way past the solid Henley defence.

Cheesman doubled his side’s lead on the hour mark when, having won the ball and exchanging passes with Owen Darani, he fired in a shot which was initially saved by the visiting keeper before scoring from the rebound.

Nick Holzer extended Henley’s lead after 70 minutes when he scored direct form a corner. Five minutes later Toby Camfield wrapped up the scoring when he headed home at the back post following another well-flighted Holzer corner.

Elsewhere in the division WARGRAVE crashed 9-2 away at WOODLEY UNITED A.

In Division 4 Daniel Reynolds netted a hat-trick as GORING UNITED RESERVES came from 2-1 down to win 5-3 at TAPLOW UNITED A. Angus Williams and Alex Davies were also on target for the visitors.