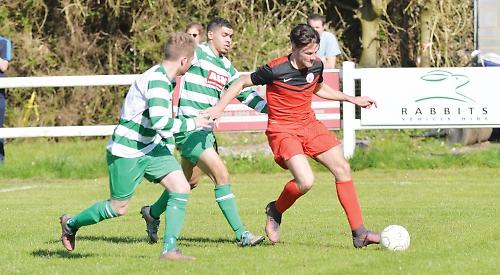 HENLEY TOWN picked up a morale boosting 6-0 win to progress to the second round of the Oxfordshire Senior Cup at the Triangle Ground on Tuesday night.

The win, the Red Kites second of the season in all competitions, saw the
home side play some good football in an entertaining encounter against their Oxfordshire Senior League opponents.

Ruben Limbu opened the scoring for the hosts after just 15 minutes with a simple tap-in following a well-worked move before Musa Drammeft doubled the lead on 25 minutes with a long range shot.

Five minutes into the second half Limbu added his second of the game with a shot from outside the area following a good break down the left.

Chris Hood made it 5-0 on 73 minutes when he fired home through a crowded box. Hood made it 6-0 two minutes later with a tap-in from six yards.

CHINNOR’S Playing Field ground once again proved an unhappy hunting ground for Henley as they crashed to a 5-0 Uhlsport Hellenic League Division 1 East defeat on Saturday.

The visitors failed to cope with the physical and more direct style of the home side. The game was end-to-end for the first quarter but once again the Red Kites defence failed to deal with a free kick on the right and Ben Morgain found space to easily slot the ball past Mariah Cosmin to give the hosts the lead after 24 minutes. New signing Musa Drammeft was causing Chinnor problems with his close skill and pace but Henley never had a shot to trouble Ben Taunton in the Chinnor goal.

After the break Henley started brightly but in the 55th minute the defence failed to clear a left wing corner and Chinnor centre back Aiden Bailey headed home to put his side 2-0 ahead.

The Red Kites conceded another free kick just outside the area on the right and James Bonwick lost his marker to head home Chinnor’s third goal in the 62nd minute. Chinnor’s fourth goal came in the 75th minute when a left wing corner found Aiden Bailey with plenty of space to head home his second of the match.

In the 81st minute Henley were reduced to 10 men when Graham High picked up his second yellow card and was dismissed by referee Luke Peacock.

Henley’s Loridon Daka had a fierce effort well saved by Taunton but in the closing stages Chinnor substitute Rory Lonsdale scored the best goal of the match with a shot from 25 yards that flew past Cosmin.

Henley played the more attractive football but their defending from set pieces cost them dearly.