Hotspurs hold on to record first league win of season 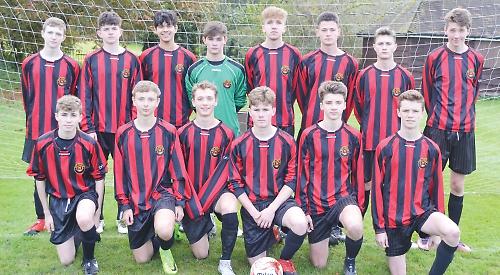 FOLLOWING on from the promising performances of the previous weeks, AFC HENLEY HURRICANES U18s crashed to a 4-0 home defeat against BURNHAM U18s in the East Berks League on Saturday.

The strong visiting side had the better possession in the first half and determined defending was enough to restrict Burnham who attacked with purpose, producing dangerous crosses.

Henley’s problems were largely self-inflicted and avoidable as they conceded two goals but they continued to attempt to get a passing game back on track and produced some skilful passages of play.

Burnham struck with two late goals to kill the game. The home side needed to apply their possession game and show the confidence that has been improving immensely since last season.

Despite having lost their first two matches this season, the Hotspurs, donning their new gold kit, got the match off to a good start with Barnaby Burletson putting the hosts 1-0 up after five minutes.

Soon after Burletson added his second of the game to put the Hotspurs 2-0 up. Edward Pratt, in central defence position, formed a solid defence wall together with Will Simpson and Lisanne Schoenmakers. The rest of the team also defended well and helped each other out each time the ball was lost.

Thomas Gahan-Munro, Damian Fannan and Kit Daly worked well together, creating a number of chances. However, after 20 minutes Rangers were awarded a penalty for hand ball but Jack D’Cruz in the Henley goal pulled off a fine save to deny the visitors.

Just before the half-time whistle Henley went 3-0 up when Kit Daly curled the ball into the net.

Henley used all three of their substitutes in the second half as the visitors stepped up their game and pulled a goal back. For most of the half Rangers seemed the stronger team and created several scoring chances while Benedict Slavin and Noah Allen both went close for the hosts and Roman Meredith and Matthew Laing contributed well to several attacking moves.

Rangers added a second goal to make it 3-2 but Henley held on to secure all three points with Will Simpson being named man-of-the-match.

AFC HENLEY HURRICANES U11s recorded their first win of the season as they triumphed 6-3 at SANDHURST U11s.

Having endured a torrid start to the season the previous week when they lost 8-3 to Ascot, the newly assembled nine-a-side squad side put in a dominant performance.

Man-of-the-match Tom Yeoman netted in the first quarter with a sweetly struck free kick from the edge of the box. Sandhurst responded quickly to equalise.

Ben Horner was dominating his penalty area and his handling was exemplary as he dealt efficiently with everything thrown at him while Alec Steele had a solid game at the back with his tough tackling and effective distribution.

Olly Saunders was patrolling the left flank and he sent in an inch-perfect cross for striker Joe Turner at the start of the second quarter. Turner danced round the keeper and buried the ball into the back of the net as the Hurricanes regained the lead.

Luca Thomson was next on the scoresheet as he intercepted a pass from the opposition keeper and made no mistake from 10 yards out to stretch the away side’s advantage before Sandhurst pulled a goal back to make it 3-2 at half-time.

Turner led the charge at the start of the third quarter and he played in Thomson who made it 4-2. Daniel Tsoi was at his tenacious best flying down the right wing and his clever play set up a number of chances that the visitors could not convert. A lapse in concentration again allowed the hosts back into the game as the third quarter ended 4-3.

At the start of the last period Nicolai Bruun-Andersen skipped and tricked his way past the Sandhurst back line. Once past the opposition ranks there was only going to be one result as he netted the Hurricanes’ fifth goal.

Tom Yeoman then hit a thunderbolt from 25 yards out which cannoned off the crossbar. Tom Atkinson was fastest to react as he lashed in a shot from the rebound that the Sandhurst keeper could only parry and Henry Steele made sure of the goal by ramming the ball over the line to wrap up the scoring.