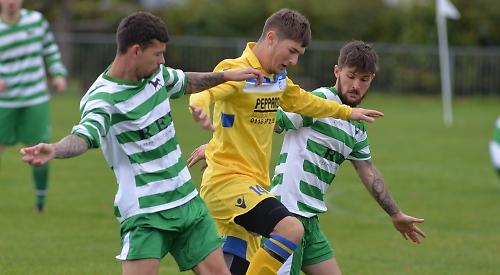 DANIEL Donegan netted twice as EMMER GREEN ran out comfortable 6-0 winners in their Senior Division derby with a weakened KIDMORE END/THE MOD side that were missing eight first team players at the Recreation Ground on Sunday.

Jordan Lovelock opened the scoring for the hosts on 20 minutes, placing the ball in the bottom right hand corner.

Craig Fitzpatrick made it 2-0 after jumping on the end of Ryan Adams’ shot that the keeper could only parry directly into Fitzpatrick’s path. Daniel Donegan extended the lead with a shot that gave the keeper no chance to put Emmer Green 3-0 up at the break.

The home side dominated the second half and on the hour mark a Daniel Donegan free kick made it 4-0.

Five minutes later Lovelock went on a mazy run down the left and crossed to Ryan Adams who flicked on to Johnny Adey to put the home side 5-0 up. Chris Read wrapped up the scoring when he fired home from close range.

Kidmore End created a couple of scoring chances with right back Nathan Blissett having a good game for the visitors.

SC UNITED progressed to the second round of the Industrial Cup after beating SPENCERS WOOD 2-1 at Bishopswood.

Aaron Attfield opened the scoring on the half hour mark before a Paul Read free-kick was parried into the path of Tom Payne who made it 2-0. Spencers Wood scored from the penalty late in the game.