Woodcote/Stoke Row are back on top following fight back 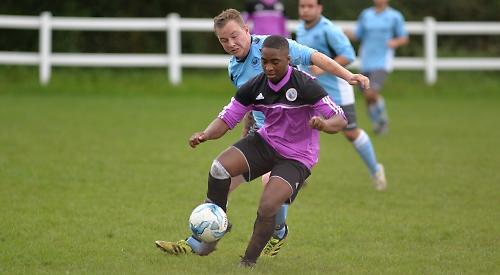 Marlow started brightly in this top-of-the-table clash and threatened to blow the visitors away and it took two really good saves in quick succession from Ryan Corbett to prevent an early goal, but the attacks continued wave-on-wave and the home side were in the lead inside 15 minutes. A Woodcote free kick deep in the Marlow half saw too many players committed to attack and a swift counter ended in a 1-0 scoreline.

Two minutes later, the sheer attacking pace of the Marlow forwards undid the Woodcote defence again and led to another goal.

A heavy defeat looked likely for the visitors, but somehow they clawed their way into the match. On 21 minutes James Worsfold did well to elude his marker and his well-directed header from Adam Cashin-Murray’s pinpoint cross found the top corner for 2-1. Marlow continued to boss the game, but 15 minutes of madness were to cost them dearly.

In the 30th minute the Marlow captain was shown a straight red card for a dangerously high tackle on Sam Tucker and five minutes later the scores were level. Frank Dillon was the provider from a free kick and his twin Jake was the beneficiary as he rose to head home.

There was more drama to come as, on the stroke of half-time, Marlow were reduced to nine men as another player was sent off for showing dissent, having previously been cautioned by the official.

The home side refused to sit back and defend in the second half and for much of that time they looked as if they might grab a win. It was not until the 80th minute that Woodcote secured all three points when Jake Tucker provided the pinpoint free kick for Sam Green to head home.

HENLEY TOWN RESERVES moved up to second place in Division 3 thanks to a 2-1 win at home to WOODLEY UNITED A in a match that saw all the goals scored in the first half.

Henley got off to a good start against a United side who started the game with 10 men and took the lead after three minutes when Owen Darani won the ball and played in Toby Camfield who fired home past the Woodley keeper. Soon after Darani went close to getting his name on the score sheet but his shot went wide of the post.

United were then given a controversial penalty when the ball was played into the Henley area and appeared to bounce up and hit Craig Trimmings on the chest but the referee awarded a spot kick for hand ball.

Henley goalkeeper Lucas Romero Jinks managed to save the penalty, pushing the ball out to his right but the visitors reacted quickest and played the ball back into the area where a Woodley United player equalised.

Just before half-time Michel Millington won the ball and put in a cross which Camfield headed home to restore the home side’s lead with his second goal of the match.

The second half, in which Woodley were back up to 11 men, was a more even affair with Camfield going close to completing his hat-trick for the hosts.

GORING UNITED moved up to third place in Division 4 thanks to a 4-1 home win against HARCHESTER HAWKS DEVELOPMENT. Jonathan Nicholas netted a hat-trick while Daniel Reynolds also got his name on the score sheet for the hosts.