Grant wraps up scoring as unbeaten Henley march on 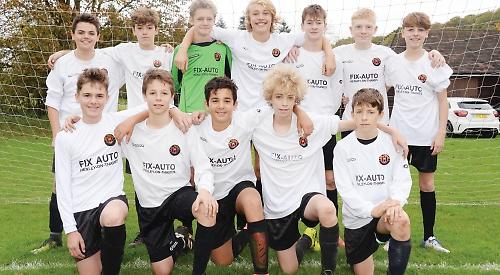 Ben Hudson got the hosts off to a good start with a smart left footed finish across the keeper from outside the box. Archie Barker made it 2-0, cutting in from the left and stroking the ball into the far corner.

Elliot Fielder continued his scoring run, netting his fourth goal in four games by calmly finishing from a one-on-one with the Mytchett keeper. Fielder added to his haul with a second before Lucas Pestana got in on the act to score his first of the season.

Not to be outdone Barker then scored his second, heading powerfully in at the near post. The game was wrapped up in the last minute by Felix Grant who capped another strong performance for the Hurricanes by curling the ball into the top corner.

The match got off to a good start with both sides creating chances with the hosts winning several corners.

Kit Daly managed to penalise one mistake in the Scorpions defence, but his upper left corner curling shot just went over.

Henley had some lucky escapes in the early stages including a near own goal after a corner kick but the defence worked hard with captain Edward Pratt in fine form.

The Scorpion took the lead on 15 minutes when a free kick found the back of the Henley net. Callum Gordon went close to equalising but the ball bounced off the bar. Soon after the hosts netted again to make it 2-0.

In the second half Henley had two chances early on but failed to convert. Henley played more on their opponents’ half as their play flowed better.

After 12 minutes Daly pulled a goal back with the first touch after a corner kick from Barnaby Burletson. At this point the game got more physical as several of Henley’s players got injured before the hosts pounced on a mistake to make it 3-1.

Two own goals and a deflected free kick left the home side reeling in a game they could have got something out of.

The hosts were slow out of the blocks allowing Twyford an early foothold in the game and the visitors were soon in front after a defensive lapse from the Hurricanes.

Captain Olly Saunders was set for a busy day but his positional awareness and reading of the game helped keep the scoring at bay whilst Ben Horner, in the home goal, was forced into action on a number of occasions but dealt well with the early onslaught.

Sam Winters struck a 30-yard shot against the underside of the bar as the Hurricanes ended the first quarter a goal down.

The second quarter did not start well as a disputed free kick was deflected in and an own goal made it 3-0 to the Comets.

Man-of-the-match Luca Thomson had one of his best games in the red and black shirt shutting down Twyford’s main attacking threat. Not content with focusing on his defensive work he sent Tom Yeoman through who scored with a left foot volley to make it 3-1. Yeoman’s good work was quickly undone though as Twyford scored again to make it 4-1 at half-time.

Twyford again started well and were soon 6-1 in front as they added two more goals to their tally. The Hurricanes came roaring back to life through the work of striker of Sam Winters who netted twice before the end of the third quarter. The first was a well taken one-on-one chance whilst the second was a sweetly struck volley.

At 6-3 down at the start of the last quarter the Hurricanes pushed on and a brave tackle by Tom Atkinson sent Yeoman through who made no mistake.

Finnbar Scott down the left set up a number of chances for the home side that were not capitalised on. However, Winters secured his hat-trick as a through ball from Joe Turner allowed him to slot through the keeper’s legs.

Twyford nicked a goal back to make it 7-5 but still the Hurricanes refused to lie down and it was hard working midfielder Daniel Tsoi who made it 7-6 from close range after good work by Winters. This set up a barnstorming finish and the hosts had chances to draw the game level before the visitors netted their eighth goal of the game.