Goalkeeping crisis leads to Red Kites being hit for six 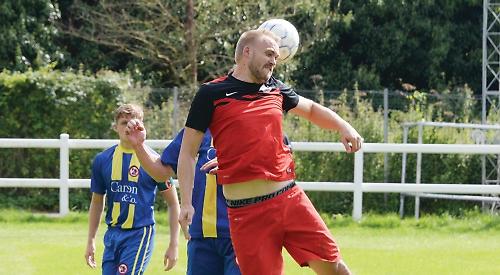 Following the previous weekend’s close encounter with league leaders Bicester, Henley manager Jock Mowat had great expectations for a good result. He intended to field the same side but goalkeeper Cosman Mariah was unavailable due to work commitments and was due to be replaced by former Reading youth team keeper Jack Baldwin but he failed to arrive due to a puncture on car on his way his way to the ground.

With no goalkeeper amongst the substitutes utility player Will Jaycock volunteered to put on the keeper’s jersey.

The Wasps kept the pressure on and it was no surprise when former Penn and Tylers Green striker Chris Hurst put his team in front after 10 minutes after the referee failed to spot what appeared to be a handball offence in the area.

Henley went further behind in the 15th minute when Chalfont centre back Josh Urquhart firmly headed past Jaycock from a left wing corner.

Henley managed to attack with Ryan Szram and Abdul Ally prominent but failed to beat the agile Den Little in the Wasps goal. On the half-hour mark Chris Hurst ran through to beat the Red Kites’ offside trap to make it 3-0. Henley then attacked and a Szram cross was headed past Little by Rupen Limbu only to be flagged offside. In the second half Chalfont continued to press forward and Hurst collected a rebound from a Henley defender to complete his hat-trick in the 49th minute to make it 4-0.

The Wasps were more determined and the Town’s midfield was ineffective and it was no surprise when Ryan Williams found Tom Fifield who made it 5-0 with half an hour remaining.

The Henley manager made changes bringing on Tommy Elmore and Harry Campbell for Loridon Daka and Karol Derewenko and soon after Josh Gillespie replaced Fraser Mowat.

The Red Kites did have a spell on the offensive but failed to test the Chalfont keeper with their strong defence forcing them to shoot from a distance before another quick break initiated by Ryan Williams set up the Wasps sixth goal scored again by the prolific Hurst.

In the 84th minute Elmore and Szram combined with a nice one-two on edge of area but the final shot was blocked by a Chalfont defender and went out for a corner. In the closing stages a 25-yard free kick taken by Limbu went over the bar.