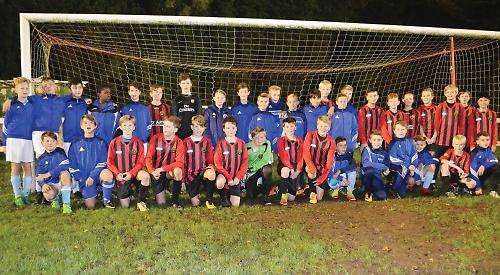 The hosts, made up from representatives from the club’s three U13 sides, started the match brightly, with good breaks down both wings.

After the opening 10 minutes SC Leichlingen gradually got into the match, hitting Henley on the break on a number of occasions. Good defensive cover from Henley and some fluid breaks forward relieved the pressure and good play by Danny McAllister down the right almost resulted in a goal as he pulled the ball back from the touchline, only for it to run to the back of the 18-yard box and be cleared by the German side. This led to a break by Leichlingen, which was well saved by the Henley goalkeeper. The game then fluctuated back and forth, before a strong run down the right resulted in Leichlingen squaring the ball to the top of the 18-yard box. Maiko Ronchen’s looping shot beat the outstretched Henley keeper to give the visitors the lead against the run of play.

Henley hit back immediately when a ball down the left released Archie Smith to break clear of the Leichlingen defence to equalise.

Soon after Tyler Chidwick made a break down the left, turning the keeper and drawing the foul for a penalty to the hosts. Danny McAllister calmly stepped up and placed the ball to the keeper’s left to put Henley 2-1 up.

Henley started the second half strongly, making some good breaks and their pressure soon told with Tyler Chidwick again breaking down the left and this time getting clear of the German defence before tucking the ball past the Leichlingen keeper.

An even period of the match was ended when a free kick led to a run down the right, with the ball being pulled back for Luke Morgan to slot home, restoring Henley’s two-goal advantage.

The hosts then increasingly put Leichlingen under pressure, but the visitors again showed their mettle, with Maiko Ronchen running clear of the Henley defence to once more peg Henley back. The last five minutes were end to end, with AFC Henley managing to hold out and win the shield.

After the match AFC Henley chairman Trevor Howell welcomed both sets of players and supporters to the weekend’s events in both English and German before the town’s Deputy Mayor, Lorraine Hillier, presented the winners’ shield to AFC Henley captain Danny McAllister.

On Saturday the Henley and Leichlingen players were split into seven mixed German and English teams, representing seven European clubs, including the visitors’ local teams — Bayer Leverkusen and FC Koln.

Following a round-robin tournament and two semi-finals, a Manchester United side took on Real Madrid in the final.

At half-time the final remained goalless but early in the second half Archie Smith scored for Manchester United. Then, with just two minutes remaining, Danny McAllister equalised for Real Madrid.

Spectators and players gathered around the penalty area and were treated to the tension of a penalty shoot-out which Real Madrid won 4-1.