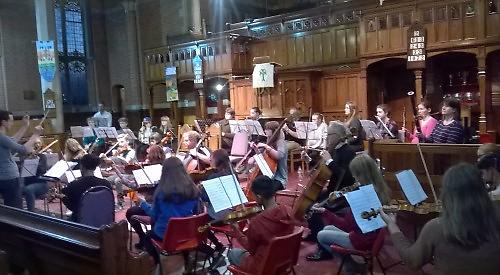 DOZENS of junior footballers and musicians from Germany spent a weekend in Henley on an exchange visit.

The youngsters from Leichlingen, Henley’s twin town, stayed with families in and around the town and took part in a football match and a concert.

AFC Henley has been holding an annual under-13s game with their German counterparts at Henley Town FC’s Mill Lane ground since 1983.

This year’s match, which took place on Friday evening, ended in a 4-3 victory for the home side, who were presented with the Duke’s Shield trophy by Deputy Mayor Lorraine Hillier.

On Saturday, the players were mixed into several smaller sides for a knock-out tournament at Jubilee Park, which ended with a penalty shootout.

In the evening, a twinning party was held at Shiplake memorial hall for the visitors and their host families.

On Sunday, about 16 musicians from Leichlingen music school took part in the concert at the Christ Church Centre in Reading Road.

The concert was organised by Paul Cox, who runs the Henley Music Centre, and also featured musicians from the Henley Symphony Orchestra and singers from the Royal Academy of Music.

Henley Mayor Kellie Hinton, who attended with her seven-year-old daughter Hallie, said: “It was really lovely. I was privileged enough to say a few words at the beginning about how important twinning is. I think it’s so important, especially for children.

“Twinning is about learning about other cultures and the concert was very much in the spirit of that.

“The vocalists and musicians were incredible and Hallie really enjoyed it too.”

AFC Henley chairman Howell said: “The Germans were extremely happy with the reception and hospitality they received. They went back thinking very well of us.

“I know the host parents really enjoyed having the kids there. The parents got involved and organised the social side, the coaches organised the football and everyone thoroughly enjoyed it.

“Seeing the mix of two cultures was eye-opening but music and football are shared languages.”