Martin's double fires Hurricanes back to the top of league table 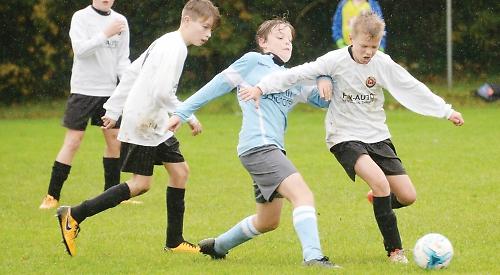 AFC HENLEY HURRICANES U15s edged out EVERSLEY AND CALIFORNIA COBRAS U15s 2-1 to move back to the top of the East Berks League table and maintain their unbeaten league campaign last Saturday.

In a hard fought battle, Henley were tested for the first time this season. The Hurricanes continued to play some good football with Felix Grant, Lucas Pestana and Jamie Hudson all pulling the strings.

At the back Henley showed some real steel and determination from the returning Felix Butterworth, Phil Hayes and Owen Simmons. When added to the positional awareness and composure shown by Jem McAllister and Liam Hilditch, Ben Hudson was rarely troubled in goal.

Top scorer Sonny Martin was again the hero of the day, scoring two well-taken goals set up by Pestana and Archie Barker with the Cobras replying with a well-taken direct free kick from outside the box.

The hosts got off to a slow start and found themselves 3-0 down at half-time.

The Hurricanes upped their game in the second half with Archie Smith pulling a goal back before the visitors netted their fourth of the game.

Henley kept plugging away with Smith adding his second of the game soon after. George Hughes got his name on the score sheet to make it 4-3 and produce a nail-biting end to the game. However, despite Henley pressing forward, they were unable to find an equaliser as the Spitfires picked up all three points.

AFC HENLEY HOTSPURS U12s ran out 5-0 winners in the league away at EVERSLEY AND CALIFORNIA LIONS U12s.

Damian Fannan opened the scoring for the visitors with a good goal following a pass from Ewan Pratt.

Fannan and Pratt each had several chances after that, but it was Roman Meredith who eventually scored the second halfway into the first half.

Pratt, Lisanne Schoenmakers and Will Simpson formed Hotspurs’ ever solid line of defence and the few balls that made it past were effectively stopped by debutant Oliver Smee.

Meredith made it 4-0 after build up involving Callum Gordon and Noah Allen before Thomas Gahan-Munro scored the final goal just before the half time whistle following Benedict Slavin’s pass. No further goals came in the second half with Smee keeping out any Eversley attacks.

AFC HENLEY HURRICANES U11s went down fighting as they lost 8-3 at home to top-of-the-table EVERSLEY AND CALIFORNIA RANGERS U11s.

The Hurricanes went 1-0 down in the opening 10 seconds as the visitors lit the fuse on an explosive performance.

One quickly became two as the Hurricanes struggled to get a foothold in the game as Eversley showed their class with a well-taken finish. Ben Horner in the home goal was called upon to make a number of fine saves as he looked to keep the scoreline respectable in the face of the Eversley fireworks.

As the Hurricanes became accustomed to their new defensive formation they started to grow in confidence and begin to create openings of their own. The strike force of Tom Yeoman and Tom Bonser were linking well on the counter attack and this bore fruit at the end of the first quarter. Alec Steele sent Yeoman away with an inch perfect pass and Yeoman slid the ball home from eight yards out as the first quarter ended 2-1 to the visitors.

In the second quarter the Hurricanes shipped three goals and went in to the half-time break 5-1 down.

The fourth quarter was a much more solid affair as the hard-working back four of Joe Turner, Olly Saunders, Daniel Tsoi and Tom Atkinson refused to give up as they tackled hard and worked tirelessly to stop the rot. This solid defensive platform allowed the Hurricanes to get on the front foot and Yeoman played in Bonser who made no mistake with a fine finish.