Hurricanes breeze into next round of Berks League Cup 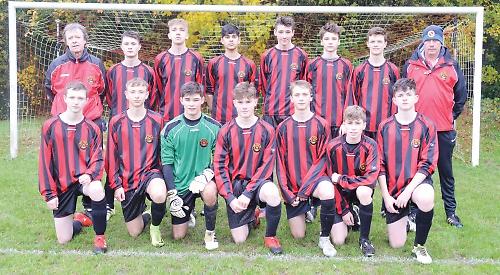 Following on from the early season league game, this was again a high tempo match. Both sides attempted to play with purpose, whilst maintaining neat passing and movement, on a challenging surface.

Whitchurch had the better of the possession and created a few problems for the home side, especially from the set plays. Henley managed to gain some momentum after 20 minutes, achieving improved possession and passing.

Despite the early Whitchurch dominance it was Henley who scored first on 38 minutes. A glanced back header by James Goulden deceived the keeper and defenders from a lofted free kick. Whitchurch maintained their competitive edge to half-time which Henley managed to match.

A change of system worked well for the home side gaining a better amount of the ball and created some promising opportunities, playing more in the Whitchurch half. The balance of play was now slightly more in Henley’s favour and Jack Earle extended the lead on 60 minutes with a low driven shot from 15 metres.

Whitchurch remained determined and threatened on the break but good work from the defensive unit restricted the away side to long range shots.

The third and decisive goal came on 87 minutes, Max Gosby controlling a free kick, his low cross controlled and shot hard and low from inside the box.

Henley defended poorly in the first half but got back to 2-2 then 2-3 at half-time. The highlight of the match was five goals scored by George Carder with others from Ryan Lynskey and Alex Martinez. Carder’s first goal was the pick of the lot with a well-executed volley.

AFC HENLEY HURRICANES U11s stormed to a 10-3 victory in the East Berks Cup at Jubilee Park against NPL YOUTH BLUE U11s as they got their season back on track.

The hosts started brightly on a rain-sodden morning and took an early lead as Daniel Tsoi played in Joe Turner with a well weighted through ball and Turner rounded the keeper and slotted home with ease as early nerves were settled.

Ben Horner kept out a fierce free kick and was distributing the ball well in between the home sticks but was powerless to stop the visitors equalising as the season-long defensive frailties were once again exposed as NPL struck back to make it 1-1 at the first quarter break.

The second quarter saw the Hurricanes score four goals without reply as man-of-the-match Tom Yeoman scored a sublime hat-trick inside 15 minutes and Tom Atkinson scored the other. The pick of Yeoman’s goals was a 25 yard lob into the top corner and this goal was added to with two clinical finishes after good work by Tom Bonser and Tom Atkinson respectively. Atkinson’s goal was a well placed effort after a one-two with Yeoman had split NPL’s back line to make it 5-1 at half-time.

At the start of the third quarter Henry Steele produced a good finish after returning Nicolai Bruun-Andersen had gone on one of his mazy runs to set Steele up. The visitors fought back and made it 6-2 heading into the final quarter. The fourth quarter saw more fireworks from the home side as Yeoman scored his fourth and fifth goals after good work by Turner. Luca Thomson and Olly Saunders gave commanding performances at the back to make sure the attacking unit could push on with confidence. This allowed Bonser to cap an impressive performance with a well taken effort and Steele added his second before the visitors notched a late consolation.