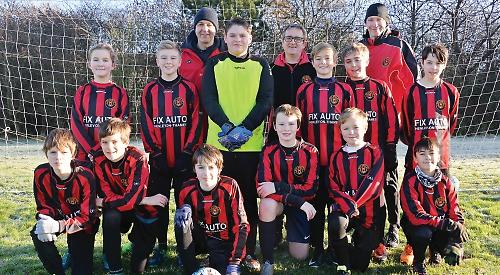 Whitchurch took the lead with a neat volleyed finish from a deep cross to the far post. The game was even until half time with both sides attempting to play a passing game on a challenging surface.

Henley started the second half with a quicker approach and equalised through James Goulden and then established some dominance. This was undone with a speculative, long-range effort regaining the lead for the home side.

Henley worked hard to regain the momentum and possession, the front two, Carder and Earle continuing to provide good hold up play and bring the wide players into the game. The reward was an equaliser, a neat finish from Alex Martinez, from inside the area.

Henley were hampered by the loss of goalkeeper Henry Harmer who was injured in an aerial challenge which resulted in a chipped tooth. The visitors, reduced now to 10 players, reorganised and increased the tempo of their play. Martinez’s powerful, low, left-footed drive from the edge of the box proved to be the winner.

This was another good performance following on from the previous week’s 4-1 win away to a quick and powerful Hurst side. Goals from Goulden, Green, Carder and Roe, all in the second half utilising counter-attacks.

AFC HENLEY HURRICANES U16s consolidated their position at the top of Division 2 with a 7-0 win at WHITEGROVE HAWKS U16s.

Will Lebeau, Pawel Kaczorowski and Hilary Lunn took control of the midfield area, linking up well, dominating possession and distributing a series of passes down both channels.

Following surging attacking runs by Jake Jones and Christian Oswald, Whitegrove’s defence was unlocked after a strong and powerful break from midfield by Lebeau, who crossed to Sam Clarke who calmly slotted home in the ninth minute.

The second goal came a minute later with a stunning solo effort from Oswald down the right flank, leaving several Whitegrove players in his wake, before driving the ball into the corner of the net.

By this point in the match Henley were in total control with two further goals from Lebeau and Jake Jones.

The fifth goal came in the 57th minute with Jake netting his second of the match. This was followed soon after by a penalty when Henry was brought down just inside the box. Henry stood up to take the penalty, but despite a powerfully drilled shot, was well saved by the keeper.

By this point Whitegrove’s defence offered up little opposition when Lebeau fired home goal number six from inside the box and 10 minutes from the end, a free-kick brought Jones a hat-trick after his tireless efforts throughout the game.

For the second week running Henley had to come back from behind. Henley started well but conceded after a good finish from Meadow's striker who counter-attacked at speed leaving the Henley defence trailing in his wake.

Henley got hold of the game with Felix Butterworth and Jem McAllister playing out from the back into the Henley midfield of Jamie Hudson and Lucas Pestana. Archie Barker, returning from injury and Ben Hudson were finding some space out wide and it was only a matter of time before Henley were on level terms, Sonny Martin was the scorer, blasting in from an angle from outside of the box.

On the stroke of half-time Barker marked his return with a powerful run on the right followed by a precise finish past the keeper on the inside post.

Henley were unable to keep their lead and in an increasingly scarppy second half, the pace of the Meadow Youth centre forward proved too much as he levelled the scores at 2-2.

AFC HENLEY HAWKS U13s crashed to a 6-0 defeat at home to WOKINGHAM AND EMMBROOK RANGERS U13s at Jubilee Park.

AFC HENLEY HURRICANES U11s put the WHITEGROVE KNIGHTS U11s to the sword as they ran out 3-2 winners at Jubilee Park.

The Hurricanes found themselves 1-0 down within the first two minutes following some sloppy defending. Nicolai Bruun-Andersen tried to get the hosts going with his nimble feet as did Alec Steel with his clever back heels on the opposite wing but much to their frustration the first quarter ended 1-0.

In the second quarter Tom Yeoman set up Sam Winters and he made no mistake from 10 yards with a clinical left foot finish as the scores were levelled. More was to follow as Winters turned provider as he played in Henry Steel who made a run from deep and slotted past the opposition keeper to make it 2-1.

In the third quarter Henley’s solid defensive platform allowed the Hurricanes to get forward and a good through ball from Winters set up Yeoman and his low drive made it 3-1. More could have followed as what looked like a penalty was denied the hosts after the ball was appeared to be handled on the line. The visitors broke away and scored a goal of their own to make it 3-2 at the end of the third quarter.

At the start of the fourth quarter Tom Atkinson had a goal disallowed after the ball was adjudged to have crossed the goal line in the build up play much to the surprise of the home support.

The pressure mounted on the home defence but captain Luca Thomson stood tall as a number of corners rained down into the Hurricanes box and keeper Ben Horner made a number of fine saves to keep the score line in tact as the hosts ran out winners.