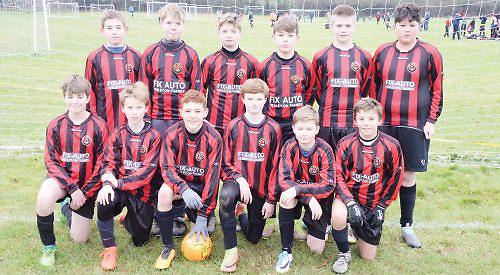 AFC HENLEY HURRICANES U15s got back to winning ways grinding out a 3-2 win away to HARTLEY WINTNEY JUNIOR HAWKS U15s in the East Berks League last Saturday.

Henley got off to a good start with Sonny Martin adding to his season’s haul, bundling the ball over the line after Hartley Witney failed to clear their lines.

Lucas Pestana added a second with a well-worked goal, Archie Barker switching play from left to right and Pestana sweeping in at the far post. Henley continued to dominate the half but failed to convert several chances to make the game safe.

Henley were left ruing their missed chances in the second half with Hartley WiNtney coming back strongly and coming back into the game with two well-taken chances.

With the Hurricanes facing their third draw on the bouce, Jamie Hudson struck a stinging shot which was well parried by the Hawks keeper but Archie Barker followed up well on the rebound, securing all three points.

The first half was an even affair with both teams having opportunities to score, but it was Bracknell who forced ahead with a good finish inside the area.

The Hotspurs did not let their heads drop and came close soon after through Clokey and Wilmott. Bracknell extended their lead after good work down the left-hand side, ending in a far post cross and low finish.

Henley came roaring back into the game with Laing smashing the post with a curling drive before Wilmott pulled a goal back for Henley before half-time with a lob over the Bracknell keeper. The second half saw both teams create opportunities but both defences stood firm. Bracknell had most of the possession and Butler needed to be on his guard to keep out a couple of speculative shots from distance. However, on the hour mark a long range shot made its way into the back of the Henley net to make it 3-1.

The scoring was completed just before the final whistle when a corner came into the area and a Bracknell player finished well from close range.

This weekend the Hotspurs take on Shinfield where they will be aiming to pick up their second win of the season.

Ashridge Park Rovers made a strong start but could not get through Henley’s defence as the first quarter finished goalless.

In the second quarter Henley’s hard work was rewarded by a goal from Meakin, following a build up from the back. Dimmestol then created a chance by passing four opponents before being deprived of the ball.

Meakin had several more chances and his efforts finally paid off when he converted just before the half-time whistle following Dimmestol’s pass.

In the third quarter Ashridge Park hit back with two goals of their own to level the scores.

In the final quarter trio George Slater, Meakin, and Joseph Woolhouse excelled in passing the ball to each other to create good attacking formations. This led to three goals, one by George Slater and two more by Meakin to secure the win.