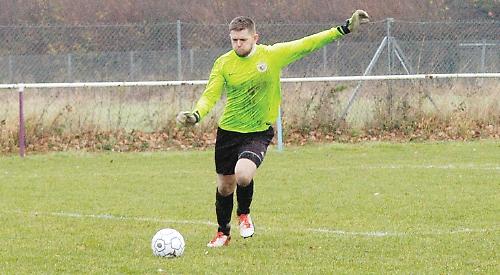 HENLEY TOWN slipped to their 10th consecutive Division 1 East defeat as they went down 7-0 at Milton United last Saturday in what turned out to be their final match of the season as, two days later, the club withdrew from the Hellenic League.

Going into the game Henley stood just one point behind the hosts at the foot of the table but, after being 2-0 down at half-time, the Red Kites conceded another five goals in the second half as well as having a player sent off 12 minutes from time.

The match started evenly with the hosts going closest to opening the scoring as they hit the post before Henley broke away and Tommy Elmore appeared to be pushed over in the Milton penalty area but not spot kick was awarded. On 22 minutes the hosts took the lead when Jack White volleyed home form a corner.

The Red Kites then piled on pressure with Fraser Mowat seeing his shot go wide of the post from 20 yards.

On the half-hour mark Henley keeper George Hunter pulled off a good double save from close range.

The hosts were awarded a penalty on 36 minutes which Jamie Davies tucked away to make it 2-0.

Two minutes later Henley were on the attack once more by Elmore’s cross into the box was comfortably cleared. Just before half-time Loridon Daka saw his volley go narrowly wide of the left hand post for the visitors.

Early in the second half Hunter was called into action was more as he pulled off another double save to deny the hosts while at the other end of the pitch Rupen Limbu forced the home keeper to pull off a good save from a 20 yard free-kick.

United increased their lead on 58 minutes when Davies netted his second of the match from close range before completing his hat-trick five minutes later to make it 4-0.

Henley kept plugging away as Elmore got another cross into the Milton penalty area but no Town player was able to make contact. Hunter pulled off another good save from a shot from the edge of the area before Davies netted his fourth goal of the game after 73 minutes when he chipped the Henley keeper, who was off his line, from 25 yards.

Henley were reduced to 10 men on 78 minutes when Paul Abbott received his marching orders for a foul on a Milton player. Mario Quitja made it 6-0 with an 18-yard shot on 80 minutes before Matt Hardwick wrapped up the scoring five minutes from time with a shot from the edge of the area.