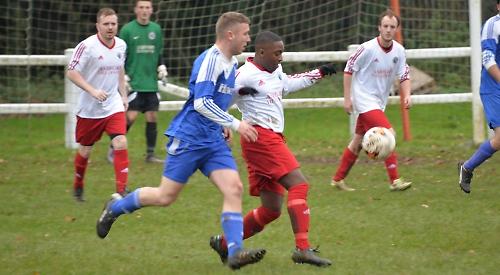 VISITING side WOODCOTE/STOKE ROW retained their position at the top of the Senior Division table thanks to a 3-0 win at HIGHMOOR/IBIS last Saturday.

The visitors began sluggishly after the late arrival on the pitch of their opponents after the officials allowed a 15 minute kick-off delay so Highmoor/Ibis could start at full-strength.

It took Woodcote until the 28th minute to open the scoring and it was a goal worth waiting for. A free kick just outside the box was expertly converted in the top right-hand corner by Mike Davies for 1-0.

Late in the half there were chances at both ends with James Worsfold firing over Jake Tucker’s cross before Kane Roberts had to be brave in a one-on-one situation to prevent a Highmoor equaliser.

The second-half followed pretty much the same pattern with Woodcote the more dangerous near goal, but it was not until the 70th minute that they increased their lead.

Soon afterwards Gardner was unlucky not to get on the score-sheet as he blasted the ball narrowly over. But Highmoor’s respite was short-lived as Woodcote completed the scoring on 80 minutes when man-of-the-match Tucker placed a firm header past the keeper from his brother Sam’s corner.

ROTHERFIELD UNITED picked up a point from their Division 1 home match with MAIDENHEAD TOWN at Bishopswood.

Maidenhead took the lead from a free kick that was bent into the top corner.

Rotherfield equalised immediately as they played the ball forward, the Maidenhead defender left it to the keeper who was too slow coming for the ball and could only take Mark Sumner out as the home midfielder went to round the keeper. Sumner managed to get back to his feet and put the ball in the net but the referee had already blown for a penalty which Tom Candish dispatched.

In Division 2 WOODCOTE/STOKE ROW RESERVES were held to a 3-3 draw at home by bottom-of-the-table HURST RESERVES.

Goals by Bailey Goodenough, Craig Antcliffe and a Tom Brownlow penalty appeared good enough to gain a 3-2 win for the hosts but with the last kick of the game, Craig Antcliffe had the misfortune to divert the ball into his own net to allow the visitors to claim a point.

WARGRAVE remain top of Division 3 after running out 1-0 winners at HENLEY TOWN RESERVES.

The hosts, who were boosted by help from their Sunday side, started the match brightly as they saw an effort go narrowly wide of the post before Craig Trimmings headed over. The Wargrave goalkeeper also pulled several good saves to keep a clean sheet.

Midway through the first half Henley’s Arron Finch was brought down in the penalty area but the resulting spot kick, taken by Finch, saw the ball go side of the post. As the half continued Wargrave created several chances but were unable to find the back of the Henley net.

The visitors scored the decisive goal early in the second half when Callum Alliston skipped past the defender following a good run down the left hand side and crossed for Michael Few to force home from close range.

Henley continued to press for a an equaliser but their task was made harder late in the game as they were reduced to 10 men when Trimmings was sent off for picking up his second yellow card of the match.

GORING UNITED RESERVES went down to a 2-0 defeat away at CINTRA PARK ROVERS in their Division 4 encounter.