Rangers bag late double to dump hosts out of the cup 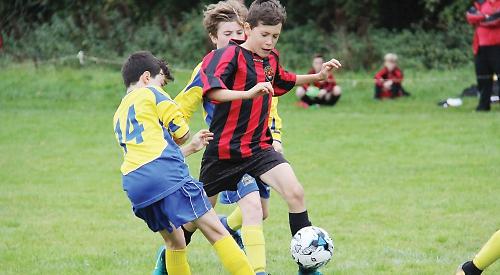 AFC HENLEY HURRICANES U18s crashed out of the East Berks League Cup at the quarter-finals stage last Saturday as they went down 4-2 at home to REEVES RANGERS U18s.

Following a strong run of results up to Christmas, the new year has started poorly for the Hurricanes. This was epitomised by Saturday’s game where a two-goal lead was lost due to a mixture of poor decision-making and missing players.

James Goulden and Jack Earle gave Henley the lead in the first half with predatory goals. However, a soft goal conceded just before half-time handed the visitors renewed hope.

A threadbare Hurricanes squad arrived early at Ascot for their first game in nearly two months and were immediately put under pressure by a strong home side and it soon told as the hosts went 1-0 up from a well-worked corner.

Hurricanes’ man-of-the-match Ben Horner kept the visitors in the game with some fine saves and brave keeping.

The Hurricanes grew in confidence as the game went on and Nicolai Bruun-Andersen almost got on the scoresheet with a header that flew over from a well flighted Tom Atkinson corner.

Daniel Tsoi was his usual tenacious self as his running and clever link-up play kept the Hurricanes on the front foot.

Against the run of play Ascot broke down the right and fired an unstoppable shot from 15 yards out that went in off the crossbar to make it 2-0.

The Hurricanes were not going to lie down and Tom Yeoman rose to power home a header from six yards out from an Atkinson corner that was delivered with pin-point accuracy to make it 2-1 at half-time.

However, the Hurricanes were quickly 4-1 down after the interval as some slick Ascot play brought them two goals. The resilient Hurricanes hit back as Yeoman notched his second after a good run by Bruun-Andersen had left a string of Ascot defenders in his wake to make it 4-2 at the third quarter break.

Joe Turner was proving a constant threat down the right and a mazy run almost sent Yeoman away. This pressure paid off as from an Ascot goal kick Francis picked up the ball and sent Sam Winters tearing away into the opposition penalty box. Winters’s strength and pace was too much for the Ascot defence and he slammed the ball home having rounded the keeper.

At 4-3 it was all to play for but the lack of game time finally told for the Hurricanes as Ascot rattled in three further goals to wrap up the win.